Difference between revisions of "Eugène d'Eichthal" 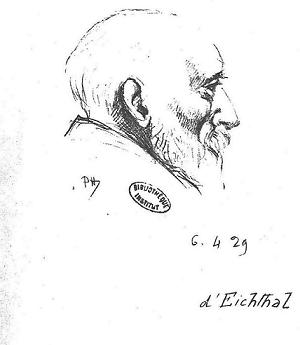 He was the son of the notable Saint-Simonian publicist and philologist Gustave d'Eichthal (1804–1886) and his wife Cécile (née Rodrigues-Henriquès; 1823–1877), both of whom came from Jewish banking families that had converted to Roman Catholicism. Eugène distinguished himself during his studies at the Lycée Bonaparte (now the Lycée Concordet) in Paris. In his youth he also spent some time in England (1862) and Spain (1864). In 1868, he took up an administrative job at Pleyel et Cie, the most famous piano manufacturing firm in France, where he contributed to improving the situation of the workers.

Over the following years Eugène would prepare a number of his late father's works for publication, including Gustave d'Eichthals correspondence with the French sociologist Auguste Comte (1798–1857) and the British thinkers John Stuart Mill (1806–1873) and Thomas Carlyle (1795–1881). In 1905, d'Eichthal was elected to the Académie des sciences morales et politiques where he became the doyen of the Political Economy section. Seven years later, he was appointed director of the École libre des sciences politiques — a post which he would hold until his death in 1936. In his book Quelques âmes d'élite (1804–1912). Esquisses et souvenirs (Paris: Hachette, 1919) he provided a series of lively portraits of French intellectuals from both his father's generation and his own, such as the historian Gabriel Monod (1844–1912).

D'Eichthal was a music-lover and could frequently be seen at public and private concerts in Paris. During Tchaikovsky's month-long stay in the French capital in the summer of 1886, d'Eichthal went to the composer's hotel twice to pay his respects but he was only able to leave his visiting card because Tchaikovsky was not in on either occasion [2]. On 12/24 June 1886, the composer wrote a brief note to d'Eichthal to apologize for not having called on him after receiving his visiting card: he explained it was due to "some very complicated family matters" (i.e. his negotiations with the French authorities to ensure that he could take his three-year-old grand-nephew Georges-Léon, the illegitimate son of his niece Tatyana, back to Russia with him so that the boy could be adopted by his brother Nikolay), and, since he had to leave Paris that very evening, he promised to call on him during his next visit to Paris [3]. However, it seems that they did not subsequently meet. Through his mother-in-law Adèle Bohomoletz and her sister Marie Clerc (1840–1915) d'Eichthal also became acquainted with Gabriel Fauré, who dedicated to him his Nocturne No. 6 for piano (1894).

One letter from Tchaikovsky to Eugène d'Eichthal has survived, dating from 1886, and has been translated into English on this website: