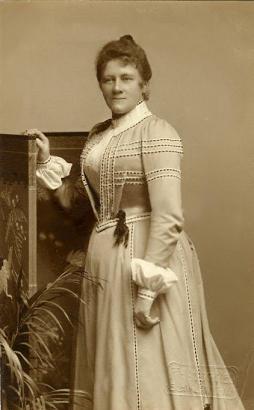 The daughter of a Baltic German landowner, she trained as a singer at the Stern Conservatory in Berlin, and studied under Julius Stockhausen. She gave her first solo recital at Riga in 1881, and the following year embarked on what was to become a lengthy stage career, serving at opera houses in Leipzig, Danzig, Cologne and Breslau. In 1891 she moved from the mezzo-soprano to the soprano repertoire, achieving renown for her interpretation of various dramatic soprano roles, especially in Wagner operas. Appearing mostly in German opera-houses, her longest engagement was at the Schwerin Court Theatre, where she sang from 1897 until her retirement from the stage in 1911. She subsequently remained active as a concert and oratorio singer, however.

Tchaikovsky's concert in Berlin on 27 January/8 February 1888, included four of his songs performed by the young mezzo-soprano, which prompted him to write a letter of recommendation attesting to her artistic qualities: "I could not be happier over the fact that Mademoiselle Aline Friede was so kind as to agree to take part in the Philharmonic Society concert which I conducted. This charming singer, so full of taste and feeling, was undoubtedly the highlight of the concert. I am delighted to be able to tell her so" [1].

One letter from Tchaikovsky to Aline Friede has survived, dating from 1888, and has been translated into English on this website: