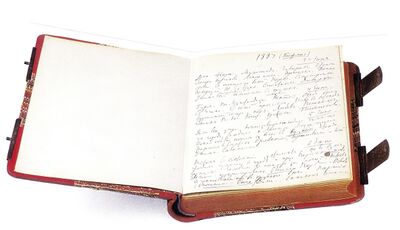 So far as Modest remembered, Tchaikovsky maintained a regular succession of daily entries of a diary from the end of the 1870s for about the next ten years: "He never showed it to anyone, and I had to give him my word of honour to burn it after his death. After all, he had done so himself, only sparing what might be seen by strangers". From this set, a further eleven diaries (including various fragments) have survived, all of them relating to the period 1881 to 1891.

It has become imperative to re-translate and re-edit Tchaikovsky's diaries, and to re-evaluate their significance. The transcriptions being published here on Tchaikovsky Research will provide a full and accurate new English translation, alongside the original Russian, and carefully checked against the original texts preserved in the Tchaikovsky House-Museum at Klin. The detailed and updated commentary in the notes will further enhance the value and interest of this material, and correct many errors in all previous publications.