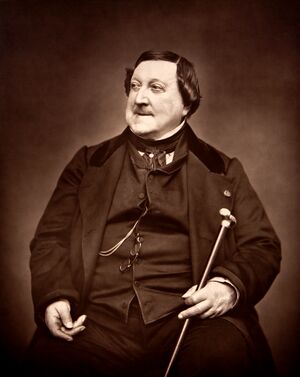 The orchestrina whose tunes so captivated little Pyotr in Votkinsk introduced him not just to Mozart but also to Rossini and other masters of Italian bel canto, for which he retained a life-long affection, as his brother Modest observed in his biography of the composer. From the family reminiscences gathered by Modest we also find out that in Saint Petersburg, in 1852, the twelve-year-old Tchaikovsky studied a complicated duet from Rossini's Semiramide with his aunt Yekaterina Alekseyeva, the only relative of his who was seriously interested in music at the time [1]. At the age of 17 he was subjected to more energetic propaganda in that respect by his Neapolitan singing-master, Luigi Piccioli, who recognized no other composers apart from the great Italian melodists. In his brief Autobiography of 1889 Tchaikovsky would recall how under Piccioli's influence he had become "a fervent admirer of Rossini, Bellini, and Donizetti". Even if his passion for Italian opera abated somewhat in later years — even to the extent that in 1871 he could speak of the "stereotypically banal episodes" which abounded in Rossini's works (TH 260) — he did emphasize in his Autobiography that "to this day I feel a certain satisfaction when I hear the richly ornamented arias, cavatinas, and duets of Rossini, with all their roulades". It is interesting that, as Herman Laroche later noted, Tchaikovsky during his years at the Conservatory preferred Rossini's serious operas — Tancredi (1813), Mosè in Egitto (1818), Semiramide (1823), and Guillaume Tell (1829) — and was sceptical towards Il barbiere di Siviglia (1816) [2]. In this respect, as in his other musical tastes (for example, his indifference to Gounod's Faust or to Wagner's Lohengrin at the time), the young Tchaikovsky was very much swimming against the tide, for Rossini's comic masterpiece was incredibly popular in Russia, especially among those who still remembered the 1843–44 Italian Opera season in Saint Petersburg, when Pauline Viardot-García as Rosina, Antonio Tamburini (1800–1876) as Figaro, and Giovanni Battista Rubini (1794–1854) as Count Almaviva had delighted Russian audiences.

Laroche pointed out that it took Tchaikovsky many years before he began to appreciate Il barbiere di Siviglia. Whist at the Conservatory, however, Tchaikovsky, who had a pleasant baritone voice and liked Italian coloratura, would sing mainly arias and duets from Rossini's serious operas: Semiramide and Otello [3]. Nevertheless by the early 1870s Tchaikovsky in his music review articles was referring to Il barbiere as "a priceless pearl of Italian music" and an "inimitable opera" (more details in the list below). It is likely that his re-evaluation of that opera was influenced by Adelina Patti's brilliant performances as Rosina during her visits to Russia.

In view of Tchaikovsky's critical remarks in an 1873 article about Guillaume Tell (1829) as an opera in which Rossini had been unfaithful to his Italian genius by aspiring to seriousness and profundity (see below), it is surprising that Laroche should later have suggested that the music of Tell influenced some parts of The Voyevoda (1867–68), The Oprichnik (1870–72), and, even later, The Maid of Orleans (1878–79). Perhaps Laroche had in mind Rossini's successful evocation of historical colour in his last stage work [4]. Tchaikovsky himself, in a letter from San Remo in February 1878, described a feverish dream he had recently had after catching the flu: "Among other things, I dreamt how, in an astonishingly lifelike scene, I was dining with Rossini and fiercely criticizing the overture to Guillaume Tell, and that he felt offended" [5].

Views On Specific Works by Rossini