Tchaikovsky made three slightly different settings of Dante's words: "Nessun maggior dolore / Che ricordarsi del tempo felice / Nella miseria" ("There is no greater sorrow than to recall happiness in the midst of misery"), from Canto V (verses 121–123) of the Inferno from La Divina Commedia (ca.1310–14).

The Divine Comedy was well-known to Tchaikovsky: his 1876 orchestral fantasia Francesca da Rimini was based on this subject, and in his correspondence, he frequently quoted the lines "Nessun maggior dolore..." when recalling happier times [1].

Firstly, Tchaikovsky noted down a melody to Dante's words (G minor, 15 bars), in his printed collection of church songs; this sketch is dated 13/25 May 1881. Then on 6/18 June 1881, he wrote out a modified version of the same theme—now in A minor (17 bars) and fully harmonized—in a letter to Nadezhda von Meck [2]. 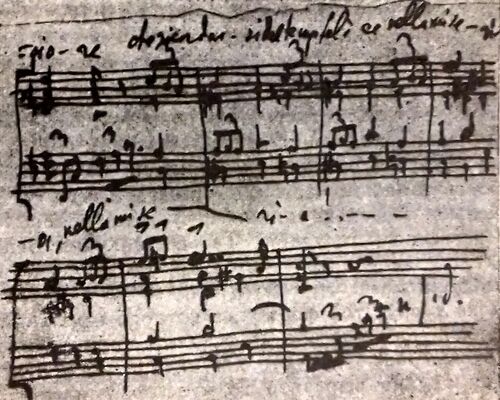 Soon afterwards he re-used this setting in the opera Mazepa [3].

In 1884 or 1885 the composer sketched a new melody to the same words in one of his notebooks. With only small changes, this new setting was used as Astarte's theme in the symphony Manfred, which dates from 1885, and it is possible that Tchaikovsky conceived this sketch with the symphony in mind [4].