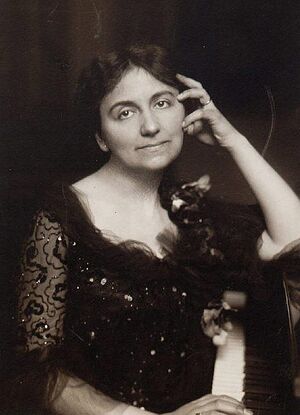 Clothilde was born in Paris as the daughter of Martin Kleeberg and his wife, German-Jewish immigrants from Mainz. She became a student at the Paris Conservatory, where she gained first prize for piano at the age of 12. She made her debut in Beethoven's Third Piano Concerto at one of Jules Pasdeloup's concerts in 1878, and, according to some sources, went on a concert tour of Denmark, Russia, Austria, and the Netherlands in 1881. She gave her first solo recital in London in 1883. Hans Richter introduced her to the Viennese public, and she appeared with great success in London and Berlin, distinguishing herself, in particular, by her interpretation of Schumann's works.

She was elected to the Académie Française in 1894, and soon afterwards married the Belgian sculptor Charles Samuel. She retired from the concert stage in 1906.

Two letters from Tchaikovsky to Clothilde Kleeberg have survived, dating from 1886 and 1891, and have been translated into English on this website: