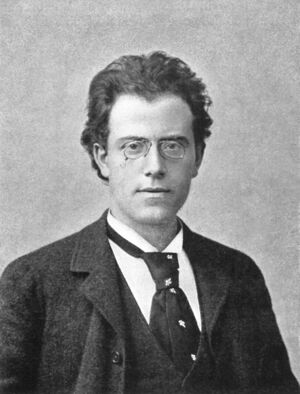 In 1891, Mahler was engaged by the Hamburg Opera as principal conductor, and this would be the longest appointment of his career so far (he stayed there until 1897). Bernhard Pollini, the director of the opera-house, invited Tchaikovsky to come to Hamburg in January 1892 to conduct the first performance in Germany of Yevgeny Onegin (after Prague in 1888, only the second time that this opera was staged outside Russia). Tchaikovsky duly arrived in Hamburg on 6/18 January and conducted the dress rehearsal, where he was delighted to find that the singers and orchestra all knew their parts very well. However, because the opera was to be sung in German, he had trouble following the recitatives and so he refused to conduct the actual performance. Mahler, who had been rehearsing the opera before Tchaikovsky's arrival, was thus given the honour of conducting the German premiere of Yevgeny Onegin on 7/19 January 1892 in the composer's presence. The previous evening, Mahler had also conducted a performance of Wagner's Tannhäuser which greatly impressed Tchaikovsky, as we may see from the letter he wrote to his nephew Vladimir Davydov on the morning of 7/19 January, in which he also expressed his doubts as to whether Onegin would go down well with the German audience:

Tchaikovsky's misgivings were partly based on his experiences four years earlier, when the concert featuring his own works which he had conducted in Hamburg on 8/20 January 1888 had not gone down too well with the conservative audience (see Chapter X in the Autobiographical Account of a Tour Abroad). These misgivings about the German premiere of Onegin proved to be well founded, since the audience's reaction was lukewarm. Moreover, whilst some critics, above all Josef Sittard, praised Tchaikovsky's music, they were unanimous in lamenting what they perceived to be the opera's lack of dramatic vitality [4]. On the other hand, they all acknowledged the loving care with which Mahler had rehearsed the opera with the singers and orchestra-players. Tchaikovsky seems to have attended a small party after the performance, together with Mahler and Pollini, although no reliable account of this celebration has come down to us [5]. In a letter written around that time Mahler described Tchaikovsky as "an elderly gentleman, very likeable, with elegant manners, who seems to be quite rich" [6].

Mahler also conducted the first performance of Iolanta outside Russia, on 22 December 1892/3 January 1893, just over a fortnight after the opera's premiere in Saint Petersburg. Although Tchaikovsky decided not to come to Hamburg on that occasion, he did pay a brief visit to the Hanseatic city later that year to attend the revival of Iolanta for the next season. At the opening performance on 26 August/7 September 1893, Mahler was again conducting, and the memoirs of Josef Bohuslav Foerster, who was then based in Hamburg, show how delighted Tchaikovsky was by the success of Iolanta there (for more details, see the article on Foerster).

In May 1897, Mahler was appointed conductor at the Vienna Hofoper (later the Staatsoper), and already in October of that year became artistic director. His ten years in Vienna (1897–1907), during which he built up an outstanding ensemble of singers, revealed to the whole world his greatness as a conductor and director. It is significant that one of the first operas he selected during his tenure at the Hofoper was Yevgeny Onegin. The first performance in Vienna of this opera on 19 November 1897 [N.S.] was a tremendous success. Even the formidable critic Eduard Hanslick (1825–1904), who had notoriously rubbished Tchaikovsky's Violin Concerto as "stinking music" at its world-premiere in Vienna in 1881 (see Chapter IV in the Autobiographical Account of a Tour Abroad), praised Onegin for its "artistic sincerity" and the "aristocratic touch" of its "eloquent and beautiful" vocal parts and instrumentation (Hanslick even cast aside some of his habitual anti-Russian prejudices) [8]. It was thanks to Mahler that Yevgeny Onegin became a staple of the operatic repertoire in German-speaking countries. On 22 March 1900 [N.S.], he also conducted the first performance of Iolanta in the Austrian capital.

In 1901, Mahler married Alma Maria Schindler (1879–1964), the daughter of a Viennese painter with artistic aspirations of her own. The following year, on 9 December 1902 [N.S.], he conducted the first performance in Vienna of The Queen of Spades, which he regarded as "the most mature and artistically solid" of all of Tchaikovsky's works [9]. Although his health was already severely undermined by heart disease, Mahler travelled to the United States again for the 1909–10 winter season and, amongst other commitments (including some work on his unfinished Tenth Symphony), conducted the American premiere of The Queen of Spades on 5 March 1910 [N.S.] at the New York Metropolitan Opera.