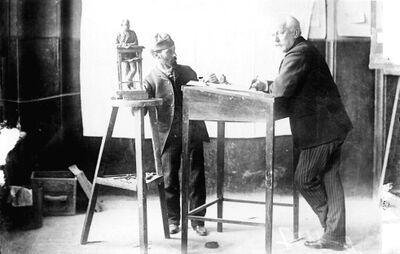 He was raised in Vilna, where his abilities found the attention of the sculptor Mark Antokolsky (1843–1902), who trained him at his workshop in Saint Petersburg from 1870. After touring Italy with his mentor, Ilya was entered into the Technical College, and then in 1878 to the sculptural department of the Academy of Fine Arts in Saint Petersburg. In 1886 he earned a gold medal prize and a first class degree. Following the revolution, he became the leader (1918–1921), and then dean of the sculptural department (1921–1923) of the Petrograd State Free Artistic Workshops. He was most famous for his monuments to prominent figures in Saint Petersburg, but was also the master of smaller statuettes. The picture (right) shows Tchaikovsky posing for such a figurine in Gintsburg's Saint Petersburg studio in December 1892.

One letter from Tchaikovsky to Ilya Gintsburg has survived, dating from 1892, and has been translated into English on this website: