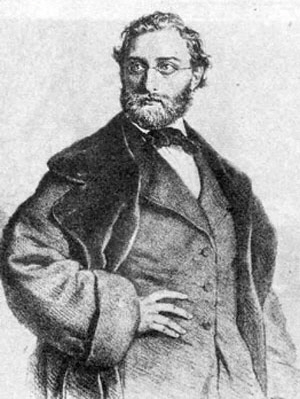 Laub's father, a violinist and music teacher of humble origins, discovered the boy's extraordinary musical gifts and started teaching him the violin when he was just aged 4, soon displaying him at the cafés of Prague as a child prodigy. At the age of 10, Ferdinand was taken under the wing of Moric Mildner (1812–1865), the distinguished concertmaster at the Estates Theatre in Prague, who funded his studies at the city's conservatory for four years (1843–1846). The fourteen-year-old Laub's performance at a concert so impressed Liszt and Berlioz that the latter invited him to Paris. At a competition held during the Great Exhibition of 1851 in London, Laub was awarded first prize and declared to be the finest violin virtuoso in the world. He was engaged at the orchestra of the royal opera-house in Berlin, gave concert tours in Denmark, England, Norway, and Switzerland. In 1860, he met his fellow-countryman Bedřich Smetana in Gothenburg, Sweden, where they gave two concerts together. Laub started his teaching activities in Weimar and Berlin, where he was a professor at the Stern Conservatory for a number of years (1855–1862).

In 1866, when the Moscow Conservatory was set up under Nikolay Rubinstein, Laub was invited to become its first professor of violin studies. During his time at the Conservatory (1866–1874) he distinguished himself not just as an excellent teacher, but also appeared regularly as the primarius of the Russian Musical Society's string quartet (the so-called "Moscow Quartet"). Tchaikovsky was so impressed by his violin playing in the great works of the classical chamber music repertoire that it eventually prompted him to write his String Quartet No. 1 (1871) and String Quartet No. 2 (1874), both of which were premiered by the Moscow Quartet with Laub as first violinist.

Laub also composed some works for his instrument, including a now-lost Violin Concerto (reviewed by Tchaikovsky in TH 288). He also continued to give concerts all over Europe, and the strain of this, together with his teaching duties in Moscow, undermined his already weak health. In 1874, an ailment of the liver forced him to retire from the Conservatory and seek treatment at the spa of Karlovy Vary (Karlsbad). Tchaikovsky hoped that he would soon recover and return to Moscow, and frequently mentioned him in his articles in the course of 1874, noting that even such distinguished younger violinists as Jan Hřímalý and Adolph Brodsky could not quite replace Laub in the affections of the public. However, Laub died the following year on the way to a new spa in Merano, Italy. Tchaikovsky was greatly saddened by this loss and would dedicate his String Quartet No. 3 to the memory of his old friend.