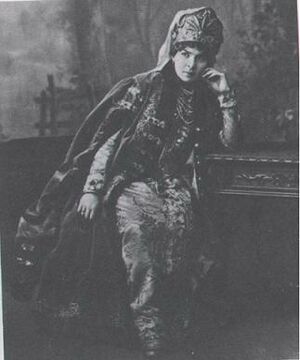 After studying at the Saint Petersburg Theatrical School and Conservatory, she performed with the Imperial Opera and the Mariinsky Theatre from 1877 to 1917, and was a professor at the Petrograd Conservatory from 1919 to 1920. She premiered the role of the Princess in Tchaikovsky's The Enchantress (1887), and of the Countess in The Queen of Spades (1890).

One letter from Tchaikovsky to Mariya Slavina has survived, dating from 1887, and has been translated into English on this website:

2 letters from Mariya Slavina to the composer, dating from 1887, are preserved in the Klin House-Museum archive.