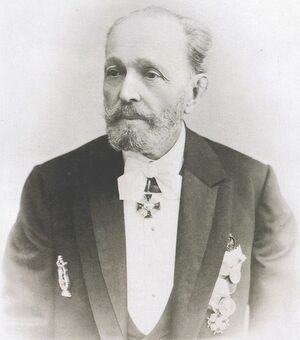 His early years were spent touring Europe with his parents, Jean Antoine Petipa, a balletmaster and teacher, and Victorine (b. Grasseau), an actress and drama teacher, but from the age of six he was educated in Brussels, studying music and the violin at the city's conservatory. In 1825, he took up ballet lessons, and made his stage debut in one of his father's productions two years later. After engagements in Bordeaux, the United States and Madrid, Petipa was invited to become principal dancer at the Imperial Theatres in Saint Petersburg. By 1871, he had risen to the position of principal ballet master, and he remained at the Mariinsky until 1907, before retiring to the Crimea at the age of 89.

Petipa and Tchaikovsky seem to have met for the first time in Saint Petersburg in November 1886, in connection with a projected ballet on the subject of Undina, which was never realised [1]. However, in subsequent years they worked closely together on the ballets The Sleeping Beauty (1888–89) and The Nutcracker (1891–92).

One letter from Tchaikovsky to Marius Petipa has survived, dating from 1889, and has been translated into English on this website:

4 letters from Petipa to Tchaikovsky, dating from 1888 and 1889, are preserved in the Klin House-Museum Archive.