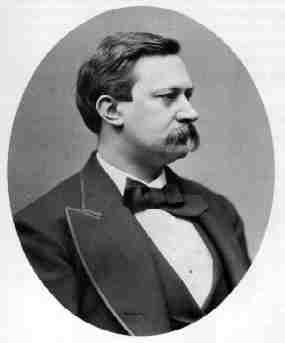 Thomas exhibited a prodigious musical talent, and at the age of seven he played the violin for the King of Hannover. In 1845 his family moved to New York, and in 1854 secured a position in the first violin section of the New York Philharmonic Society, and the following year he helped to launch a series of monthly chamber concerts in the city, which lasted for fourteen years. In 1859 he made his debut as a conductor, and formed his own orchestra in 1862. He held conducting posts in Philadelphia (1876), Brooklyn (1862–78), New York (1877–91), Cincinnati (1878–79), and Chicago (1891–1905).

On 12 November 1881 [N.S.], Thomas conducted the world premiere of Tchaikovsky's Piano Concerto No. 2 at a Philharmonic Society concert in New York, with Madeline Schiller as soloist.

One letter from Tchaikovsky to Theodore Thomas has survived, dating from 1892, and has been translated into English on this website: