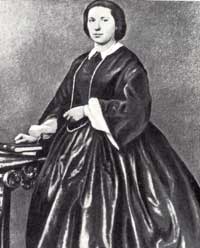 Fanny was the governess in the Tchaikovsky household from November 1844 until September 1848, when the family left Votkinsk. A gifted teacher, she had a marked influence on Tchaikovsky's early development. Although he was only eight years old when he parted from her, he continued to correspond with her occasionally, and in December 1892 he visited "Mademoiselle Fanny" at her home in rue Clémenceau, Montbéliard.

In 1894, the year after the composer's death, Modest Tchaikovsky visited Fanny Dürbach and recorded her recollections of her years with the family at Votkinsk. He also took back several of the composer's exercise books and childhood letters that she had retained for almost half-a-century to the Tchaikovsky House-Museum Archive in Klin.

7 letters from Tchaikovsky to Fanny Dürbach have survived, dating from 1848 to 1856, all of which have been translated into English on this website:

12 letters from Fanny Dürbach to the composer, dating from 1892 and 1893, are preserved in the Klin House-Museum Archive.