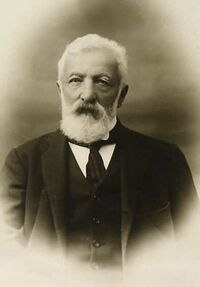 American businessman and music enthusiast (b. 8 November 1833 at Steele, near Essen; d. 11 June 1917 in New York), born Moritz Rindskopf, according to some sources.

After migrating to the United States in 1861, Reno was granted American citizenship ten years later, and after establishing his own business selling tinned fruit and preserves, he went on to become successful real-estate broker. Along with his wife Marie (née Kaufmann, b. 1841), he was a keen enthusiast for music, and became prominent in musical circles, taking part with Leopold Damrosch in the production of German opera at the Metropolitan Opera House in New York. He served as treasurer and secretary of the New York Symphony Society.

When, in 1891, Reno became president of the management company of the city's new Music Hall (which now bears the name of its founder, Andrew Carnegie), Tchaikovsky was invited to participate in the opening night's concert. When the composer arrived he was greeted by a welcoming party including Morris Reno and his daughter Alice (then just twenty years old), which caused a confused reporter for the New York Daily Tribune to announce that Tchaikovsky had arrived with his wife. The Renos later hosted a dinner party in their guests' honour, and remained in contact with the composer after his return to Russia.