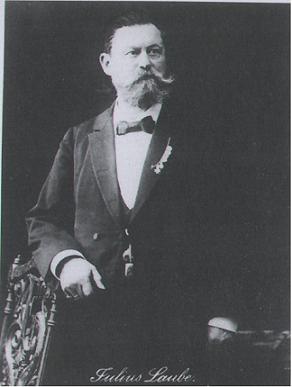 Julius started having music lessons at the age of eight, and from 1857 he was oboist with the military band of a Thuringian infantry regiment, in which he also served as a soldier. He found the time to study violin and piano as well. Alongside his military duties, Laube held the post of music director at various small provincial towns. In 1868, he became the chief of his regiment's military band and after the Franco-Prussian War of 1870–71 he was stationed with his regiment at the garrison of Altona near Hamburg. In order to concentrate on his artistic development, Laube left the army in 1877 and set up his own orchestra in Hamburg. The popular concerts he organized featured many works by contemporary composers, including Tchaikovsky, Borodin, Saint-Saëns, Bruch, Grieg, and Bizet. Amongst other highlights, Laube conducted the first performance in Hamburg of Tchaikovsky's Manfred symphony.

Tchaikovsky met Laube in Hamburg on 18 January 1888 [N.S.] and three days later attended one of his concerts at which Laube conducted in his honour the overture-fantasia Romeo and Juliet and the Italian Capriccio, as well as organizing a banquet for the distinguished Russian guest. Tchaikovsky was so impressed by Laube's efforts on behalf of contemporary music that he secured an engagement for the German conductor and his orchestra at Pavlovsk, the fashionable summer retreat of the Russian aristocracy near Saint Petersburg. From 1888 to 1891, Laube and his orchestra performed at the Pavlovsk summer concerts, as well as in other Russian towns. In June 1888, Tchaikovsky, who was then resident in Frolovskoye, wrote a letter (in German) to Laube, requesting him to feature the music of other Russian composers at the concerts he was due to conduct in Pavlovsk and to avoid performing any of his own works for the time being. He was afraid that people would think he had invited Laube to Russia just to promote his own music! [1]

Laube also went on tour with his orchestra to Berlin, Leipzig, and London. Throughout the years he had provided generous support to the Hamburg Philharmonie, and in 1896, when the the state-funded Verein der Hamburgischen Musikfreunde was established, he was appointed conductor of the Society's series of popular concerts and held this post until his retirement in 1908.

2 letters from Tchaikovsky to Julius Laube have survived, dating from 1888, both of which have been translated into English on this website: