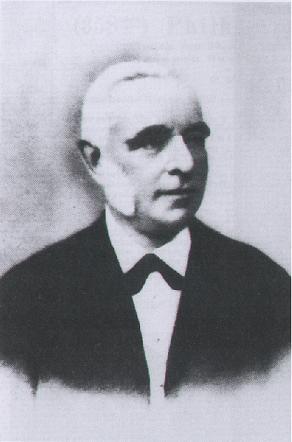 Rahter was the manager of the A. Büttner music publishing firm in Saint Petersburg from 1865 to 1890, and in 1879 he set up his own music publishing house in Hamburg. With his wife Selma he had five children, one of whom, a son, died in infancy in Saint Petersburg. The other four children were: Johann Christian Daniel (1873–1925), Ludwig (b. 1874), Hermine (b. 1877), and Selma (1879–1957). After his wife and children moved back to Hamburg around 1874, Rahter commuted regularly between the Hanseatic city and Saint Petersburg. A great admirer of Tchaikovsky's music, Rahter, from the late 1870s on, began acquiring from Pyotr Jurgenson the rights to publish several of the composer's works in Germany.

In the summer of 1887, Julius von Bernuth, the artistic director of the Hamburg Philharmonic Society, suggested to Rahter that he ask Tchaikovsky whether he would be interested in conducting a concert of his works in Hamburg. Rahter duly wrote to the composer and pointed out in his letter that if Tchaikovsky accepted this invitation, Bernuth would also write to Carl Reinecke in Leipzig to discuss the possibility of his conducting a concert at the Gewandhaus as well [2]. This led to Hamburg and Leipzig being among the first cities included in Tchaikovsky's itinerary during his first concert tour to Western Europe in January-April 1888. The first stop on the tour was Leipzig, and three days after Tchaikovsky's successful concert there (on 24 December 1887/5 January 1888), Rahter wrote to the composer promising to meet him at Hamburg railway station [3]. Although this did not work out due to the very early arrival time of his train from Leipzig on 29 December 1887/10 January 1888, Tchaikovsky did call on Rahter later that day [4]. Tchaikovsky left for nearby Lübeck the following morning in order to spend a few days there in peace and seclusion and to prepare for his forthcoming concert in Hamburg on 8/20 January. He returned to Hamburg three days before his concert and during his brief stay in the city he dined with Rahter and his family on three occasions. The entries in Tchaikovsky's diary show that he greatly enjoyed their company. For example, on 10/22 January (his last day in Hamburg) he noted: "Dinner at Rahter's. Extraordinarily charming are his wife, children, and the old lady Lapré. Rahter's brother and his son. Dinner, borsch. Speech by Rahter's brother" [5]. It was also after this dinner that Rahter accompanied Tchaikovsky on a visit to Theodor Avé-Lallemant, the venerable chairman of the city's Philharmonic Society — a visit which had far-reaching consequences because Tchaikovsky would dedicate his next major work, the Symphony No. 5, to Avé-Lallemant.

Tchaikovsky paid tribute to Rahter's generous hospitality in the account of his tour which he wrote in April 1888 (though it was not actually published in his lifetime):

Just as in Leipzig I had greatly enjoyed sharing in the family atmosphere at the homes of A. D. Brodsky and A. I. Ziloti, so in Hamburg I was given an equally heartfelt welcome by the kind Herr D. Rahter, a representative of the Büttner publishing firm, who is very well-known in our country's music world. His family has been living in Hamburg for a long time, ever since the death of his beloved son in Saint Petersburg and his fears for the health of his other children induced Herr D. Rahter to send them back to Germany with his wife. From time to time, however, he is able to visit his sorely missed family, and every summer he actually spends three months with them. For me, the many hours I spent in the company of Herr D. Rahter, his much-esteemed wife, and his delightful children (of which unfortunately only the eldest knows a few words of Russian, even though he was born in Russia) were very pleasant indeed. It is all the more gratifying for me to express here my warm gratitude to Herr Rahter for his countless efforts on my behalf and friendly interest, given that it was in fact thanks to his initiative that I was invited to Hamburg, and it was this initial proposal which triggered all the other flattering invitations that reached me from one German city after the other" [6].

On 2/14 June 1888, Rahter was in Moscow to sign a comprehensive contract with Jurgenson which accorded him the distribution rights to Tchaikovsky's works in Germany and Austria-Hungary. The previous day, on the way from Saint Petersburg to Moscow, he had paid the composer a visit at his home in Frolovskoye, and on that occasion, apart from publishing matters, Rahter seems to have discussed with Tchaikovsky the possibility of his coming to Hamburg the following year to conduct another concert. In any case, over the summer of 1888, as work on the Fifth Symphony progressed, Tchaikovsky increasingly warmed to the idea of performing it in Hamburg. At his request Rahter asked Avé-Lallemant whether he would accept the dedication of this work [7]. Finally, when the itinerary of Tchaikovsky's second concert tour of Western Europe in February-April 1889 had been finalized, it was Rahter who managed to persuade the organizers of his concert in Geneva, originally scheduled for 3/15 March, to bring it forward by six days so that the composer could conduct his Fifth Symphony at the Philharmonic Society concert in Hamburg which was to take place on that date. Rahter himself was away in Saint Petersburg on business when Tchaikovsky conducted the first performance in Germany of his new symphony on 3/15 March 1889 (after Prague, this was only its second performance outside Russia), but during his brief stay in Hamburg the composer did call on Rahter's wife and had dinner with her and her children [8]. On 5/17 March, when he was already in Hannover on the way to Paris, Tchaikovsky reported on his successful concert in a letter to Rahter, in which he also proudly noted how Brahms had stayed an extra day in Hamburg in order to attend the first rehearsal of his symphony (see Letter 3816). Later in the summer of 1889, Rahter would send Tchaikovsky greetings from Brahms when the latter again happened to visit his native city [9].

In the autumn of 1890 Rahter, who was suffering from ill-health, decided to sell his firm in Saint Petersburg and returned to Hamburg permanently. A few months earlier, though, he had taken the first steps towards securing the first production of Yevgeny Onegin at the Hamburg Opera Theatre by obtaining from Josef Paleček the booklet with the stage directions for Onegin in the Mariinsky Theatre production of 1884. As he wrote to Tchaikovsky: "I am convinced that your magnificent work must also go down well in Germany!" [10]. Rahter was in touch with Bernhard Pollini, the director of the Hamburg opera-house, and apart from Onegin, ambitious plans were afloat to mount The Queen of Spades in Hamburg and The Sleeping Beauty in Berlin [11]. Although the latter two projects did not work out (even though in the summer of 1891 Jurgenson printed a number of copies of the full score of The Queen of Spades with German text for Rahter's firm in Hamburg), the production of Onegin in the Hanseatic city did go ahead, opening on 7/19 January 1892 under the baton of Gustav Mahler and in the presence of Tchaikovsky himself. As in the case of the Fifth Symphony, this was, after Prague, only the second performance of this work outside Russia.

Unfortunately, Rahter did not live to see the production of Yevgeny Onegin in Hamburg. After his death in 1891 his publishing house was moved to Leipzig, where it was at first managed by Franz Schäffer, Rahter's assistant of many years, and then by Rahter's son, Johann Christian Daniel Rahter. In the autumn of 1892 the firm of "D. Rahter" published, in collaboration with Jurgenson in Moscow, the vocal-piano reduction of Iolanta, which facilitated the preparations for the first performance of that opera in Hamburg on 22 December 1892/3 January 1893, again with Mahler conducting.

In 1917, "D. Rahter" was taken over by the music publishers "Anton J. Benjamin" in Leipzig who to this day have maintained the imprint established by Daniel Rahter.

3 letters from Tchaikovsky to Daniel Rahter have survived, dating from 1887 to 1889, of which those highlighted in bold have been translated into English on this website:

29 letters from Daniel Rahter to Tchaikovsky, dating from 1887 to 1891, are preserved in the Klin House-Museum Archive.