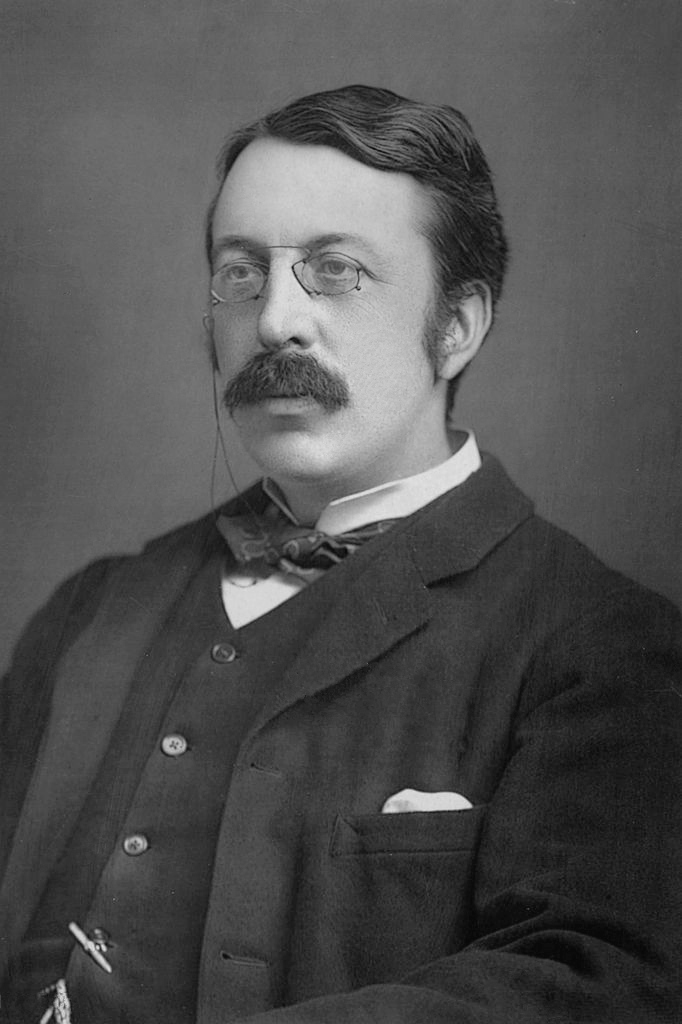 Irish composer, conductor, organist and teacher. Professor of music at Cambridge University (b. 30 September 1852 in Dublin; d. 29 March 1924 in London).

He studied at Cambridge University, and served as the organist at Trinity College there from 1873 to 1892, and conductor of the Cambridge University Music Society from 1873. He also studied at the Leipzig Conservatory (1874–76) under Carl Reinecke, and became professor of composition at the Royal College of Music from 1883 to 1924, where his students included Ralph Vaughan Williams and Gustav Holst. He received a knighthood in 1902.

Stanford was in charge of the arrangements for Tchaikovsky's visit to Cambridge University in June 1893 to receive an Honorary Doctorate of Music. In his memoirs Stanford recalled how the decision was taken to invite Tchaikovsky and described his impressions of the composer (to which he added some rather imaginative touches of his own!):

In the spring of 1892 we set on foot the organization of the movement to celebrate the Jubilee of the University Musical Society in 1893. The first step taken was the invitation of Verdi and of Brahms to become honoris causa Doctors of the University, and the programme outlined was Verdi's Requiem and Brahms's C minor Symphony [No. 1]. It was decided that if either of these composers accepted no other should be included. The answers of both were unfortunately in the negative. Verdi regretfully declined on the score of his age and the illness of his wife, and Brahms's answer, a most charming and appreciative letter, which is printed in the last volume of Kalbeck's Life, made it clear that the long journey was hateful to him. We had therefore to consider the claims of the other officers of the musical army, and determined to make the invitation include one leading representative of each nation. The choice was not difficult to make. Saint-Saëns was chosen for France, Max Bruch for Germany, Tschaikowsky (then far less known in England than since his death) for Russia, Boito for Italy, and Grieg for the North. They all accepted and came, with the exception of Grieg, who had, through illness, to postpone his visit to the following year. The programme contained one specimen of each composer, chosen by himself. Saint-Saëns played the solo part in Africa, Bruch conducted the scene of the Phoenicians from Odysseus, Boito the prologue to Mefistofele, Tschaikowsky the symphonic poem Francesca da Rimini, which, as he wrote to me, he considered to be his best work in that style. Grieg was represented in absentia by Peer Gynt […]

Tschaikowsky stayed with the late F. W. Maitland, who spoke to me with enthusiasm of his culture and grasp of extra-musical subjects. He reminded me, in more ways than one, of his countryman Turgenev, whom I once met at Madame Viardot's. He had none of the Northern roughness, was as polished as a Frenchman in his manner, and had something of the Italian in his temperament. These international qualities may have been due to a dash of Hebrew blood, for Tschaikowsky means the 'Son of Jacob' [sic!]. For all the belief which he had in himself, he was to all appearances the acme of modesty. A very curious conversation took place in the train to Cambridge between him and a musical friend of mine [Herman Klein]. He told my friend of his having written the Pathetic Symphony [sic] (which had not yet been performed); that it originally was designed in three movements, but that after he had finished the third, something compelled him to add a tragic slow movement at the end; and he added that perhaps it was prophetic. It was; for he died the following year [sic], and the cause of his death is to this day as mysterious as his prophesy" [1].

The friend to whom Stanford refers is Herman Klein (1856–1934), an English singing teacher and critic, and in his memoirs Thirty years of musical life in London, 1870-1900 (1903), Klein does indeed describe the conversation which he had with Tchaikovsky on the train to Cambridge. However, at no point in his account of this conversation does Klein refer to the Sixth Symphony (of which Tchaikovsky had only completed the sketches before he set off for England at the end of May 1893): instead, Tchaikovsky talked with Klein about the development of music in Russia, asked him about music teaching in England, as well as for his views on why Yevgeny Onegin had failed when it was given its first performance in England (at the Olympic Theatre in London) on 17 October 1892 [N.S.]. We must therefore conclude that either Klein chose not to record in his memoirs anything that Tchaikovsky told him about the Pathétique, but still mentioned it to Stanford at some point; or that Stanford, writing more than twenty years after the events described, allowed himself to be carried away by his vivid imagination and relish for myth-making!

2 letters from Tchaikovsky to Charles Villiers Stanford have survived, dating from 1893, both of which have been translated into English on this website:

6 letters from Stanford to Tchaikovsky, dating from 1892 and 1893, are preserved in the Klin House-Museum Archive.