Thematic and Bibliographical Catalogue of P. I. Čajkovskij's Works 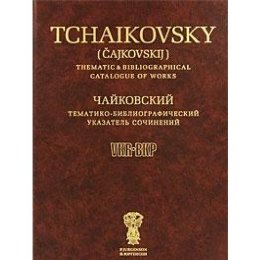 The Thematic and Bibliographical Catalogue of P. I. Čajkovskij's Works (Тематико-библиографический указатель сочинений П. И. Чайковского) was edited and compiled by Polina Vaidman, Lyudmila Korabelnikova and Valentina Rubtsova, from the staff of the Tchaikovsky House-Museum at Klin. The first edition (944 pages, ISBN 5714001605), with mainly Russian text, was published by Muzyka (Moscow) in 2003, and a revised edition with parallel Russian and English text (1107 pages, ISBN 5972000016) was issued jointly by P. Jurgenson in Moscow and by Schott in Mainz, Germany, in 2006.

Each work is allocated a ČW number, as used in the New Complete Edition of Tchaikovsky's works.