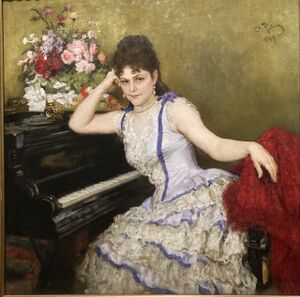 She came from a musical background with a cellist father, Josef Menter, and a singer mother Wilhelmine (b. Diepold). Sophie learned the piano during her early years, gave her first public performance aged just 15, and then travelled widely across Europe, and in 1883 she became an honorary fellow of the London Philharmonic Society. From 1883 to 1886 she was professor of piano at the Saint Petersburg Conservatory, but left this position in 1886 following the breakdown of her 14-year marriage to the Bohemian cellist David Popper (1843–1913). She subsequently settled at Itter in Austria, but continued to compose and give recitals.