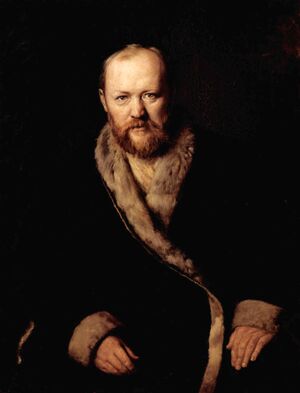 One of the leading Russian dramatists of the nineteenth century (b. 31 March/12 April 1823 in Moscow; d. 2/14 June 1886 in Slykova), born Aleksandr Nikolayevich Ostrovsky (Александр Николаевич Островский).

The son of a mercantile lawyer in Moscow, Ostrovsky studded law at the University of Moscow (1840–1843), and worked for the Commercial Court in Moscow. However, his theatrical interests were also strong, and extracts from his first play A Family Affair (Семейная картина) were published in 1847. The publication, in 1850, of his play, The Bankrupt (Банкрот), under its more well-known title Among Friends One Always Comes to Terms (Свои люди сочтёмся) resulted in an uproar within the merchant class of Moscow; it was banned until 1863 and led to his dismissal from the civil service. During the following decade Ostrovsky produced many historical plays which were well-received, and he became closely associated with the Maly Theatre in Moscow, where the majority of his plays were produced under his supervision.

In 1864 Tchaikovsky wrote an overture to Ostrovsky's 1859 play The Storm, which was his first large-scale orchestral piece. Although written as a student summer exercise, according to Modest Tchaikovsky, the composer also considered setting it as the basis for an opera, but this idea was never realised. However, Ostrovsky's 1865 comedy A Dream on the Volga (Сон на Волге), did serve as the basis for Tchaikovsky's first opera, The Voyevoda, Op. 3 (1867–68), with the author himself providing parts of the libretto. By this time Tchaikovsky had already supplied two short numbers of incidental music for Ostrovsky's Dmitry the Pretender and Vasily Shuysky, which were performed at the premiere of that 'dramatic chronicle' in 1867.

Their next collaboration was on The Snow Maiden (1873), a musical drama commissioned by the Imperial Theatres to be written by Ostrovsky and performed with Tchaikovsky's incidental music. A few weeks before the premiere Ostrovsky wrote to a friend: "Tchaikovsky's music for The Snow Maiden is enchanting" [1]. Six years later, recalling his work on The Snow Maiden, Tchaikovsky would confess to Nadezhda von Meck: "This is one of my favourite creations. It was a wonderful spring; I was in good spirits, as was always the case when summer approached, and with it three months of freedom. Ostrovsky's play appealed to me, and in three weeks I wrote the music quite effortlessly. I think that in this music one can notice the joyful spring mood with which I was suffused at the time" [2]. Although Nikolay Rimsky-Korsakov's operatic setting of the same subject (1881) has proved more enduring than the original, it seems that Ostrovsky himself preferred Tchaikovsky's music. According to Mikhail Ippolitov-Ivanov: "It was with a special heartfelt warmth that Aleksandr Nikolayevich would talk about Tchaikovsky's music for The Snow Maiden, which evidently hindered him significantly in his appreciation of Rimsky-Korsakov's The Snow Maiden. […] No doubt, Tchaikovsky's uncomplicated, sincere music, which lacked the glaring contrapuntal costume of Rimsky-Korsakov, was closer to Ostrovsky's heart, and he did not conceal the fact that as a narodnik [friend of the people] he felt a greater affinity with it" [3].

In 1874 Ostrovsky became the first president of the Society of Russian Playwrights, and in 1885 he was named artistic director for the Moscow Imperial Theatres. Shortly after this, in 1886, he communicated a request to Tchaikovsky via an intermediary to provide music to accompany a scene in The Voyevoda — not the composer's first opera, but a revised version (1885) of Ostrovsky's original play A Dream on the Volga.

Tchaikovsky's Settings of Works by Ostrovsky

In 1868 Ostrovsky offered to write a libretto for a Tchaikovsky on the subject of Alexander of Macedon (Александр Македонский), set in Babylon and in Greece at the time of Alexander the Great, but this idea was never realised.

9 letters from the composer to Aleksandr Ostrovsky have survived, dating from 1867 to 1886, all of which have been translated into English on this website;

2 letters from Ostrovsky to the composer have survived, dating from 1867 and 1873, of which one his preserved in the Klin House-Museum Archive, and one in the Russian State Archive of Literature and Art in Moscow.