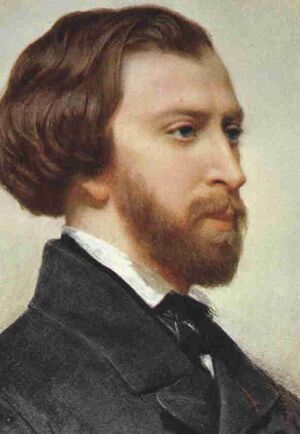 Tchaikovsky was very fond of Alfred de Musset's works, and in 1878 he wrote to Nadezhda von Meck: "I passionately love all of Musset's dramatic works. How many times have I dreamt of creating a libretto out of one of his comedies or dramas! Alas! most of them are too French, and are inconceivable and would lose all their charm if they were to be translated into a foreign language—for example, Le chandelier or Les Caprices de Marianne. Those which are less specifically French—such as Carmosine or André del Sarto, for example—are devoid of dramatic action or are too packed with philosophical reflections, as in La coupe et les lèvres. I don't understand why no French composer so far has drawn from this rich mine. [...] Do re-read, my friend, his Comédies et proverbes [...] and, in particular, Les Caprices de Marianne, Il ne faut pas badiner avec l'amour or Carmosine. Tell me, are all these works not just asking to be set to music?" [1].

Tchaikovsky's Settings of Works by Musset

In 1870, Tchaikovsky made a Russian translation of Anton Rubinstein's song Rappelle‑toi (Op. 83, No. 1), based on a poem by Musset, as Do Not Forget (Не забывай).

In 1878 and 1888, Tchaikovsky also considered writing an opera based on Musset's play Les Caprices de Marianne (1833):

I have never been able to understand why no French composer has ever let himself be inspired by Alfred de Musset's Comédies (with the exception possibly of Carmosine)? As far as I am concerned, I cannot think of anything more deliciously poetic and touching than Les Caprices de Marianne or also Le Chandelier. It is said that these masterpieces are not sufficiently effective for the stage. That may well be so! However, could such discerning and skilful connoisseurs as you and Mr Gallet not manage to adapt for the stage and with a view to the requirements of an operatic scenario the essential elements of these magnificent and powerful works by a poet whom I consider to be one of the greatest to have ever lived? I would prefer Les Caprices de Marianne above all, and I have often dreamed of making a Russian opera out of it. However, the Russian language (for all its great beauty and richness) does not, on account of its roughness and its ever so slightly barbaric flavour, lend itself sufficiently well to this genre of poetry, which is too exquisite, too subtle, too deliciously refined for it to be possible that any language other than yours could render all its charm. My Lord, how thrilled I feel when I think of the good fortune of being able to set to music something by Alfred de Musset [2].

However, Alfred de Musset's family would not permit his works to be turned into operas, much to Tchaikovsky's disappointment. "It is very sad that Madame Lardin de Musset is opposed to her brother's masterpieces being set to music", he wrote, "because I regard this whim of hers as an insurmountable obstacle to the realisation of the dream I had of creating an opera based on one or several of his comedies!" [3].