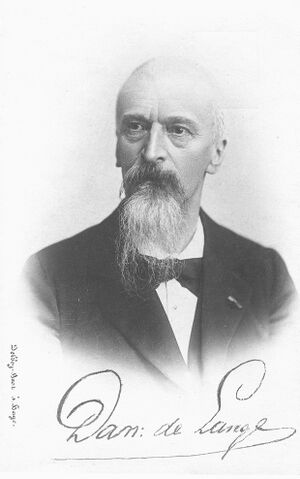 After graduating from the Brussels Conservatory in 1858, where he had studied the cello and composition, he toured eastern Europe, and taught the cello at the Lemberg (now Lviv) Conservatory for two years from 1860. After returning to Rotterdam in 1862, he taught at the Toonkunst music school, and resided in Paris as an organist and choral conductor from 1864 to 1870. In 1873, he founded a music school at Zaandam, and later helped to found the Amsterdam Conservatory, where he taught from 1884. In 1914, he moved to the United States to become director of the Isis Conservatory in Point Loma, California.

One letter from Tchaikovsky to Daniël de Lange has survived, dating from 1892, and has been translated into English on this website:

2 letters from Daniël de Lange to the composer, dating from 1891 and 1892, are preserved in the Klin House-Museum Archive.