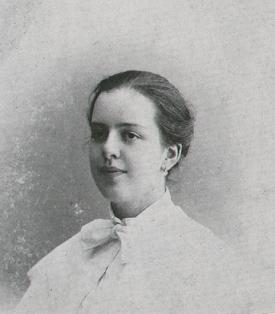 Galina was the third child of Nadezhda von Meck's son Nikolay (1863–1929) and Tchaikovsky's niece Anna (b. Davydova, 1864–1942). On a visit to England in 1912 she met her first husband, William Noel Burrowes Perrott (1880–1942), by whom she had a daughter Anna (1915–1995); however, he failed to settle into Russian life and the marriage was dissolved in 1925. Galina was later arrested for trying to assist a prisoner over the Russian frontier, and spent several years in Moscow's Lubyanka prison and exile in Siberia, where she married for the second time to a fellow prisoner, Dmitry Orlovsky, who later disappeared. She was released in 1935 and made her way to England via Germany.

In England she wrote her autobiography — As I remember them (1973) — concerning her early family life. She also translated much of the correspondence between Tchaikovsky and her grandmother into English.

An Interview with Galina von Meck

We are grateful to Tchaikovsky Research contributor Henry Zajaczkowski for allowing us to publish for the first time his annotated account of his interview with Galina von Meck in 1982.

On 7 September 1982 I carried out a brief interview with Galina von Meck at her flat in Richmond, London. She was the daughter of Tchaikovsky's niece, Anna Davydova (1864-1942) and Nadezhda von Meck's son Nikolay (1863-1929) and seemed proud in equal measure of being the composer's great-niece and his benefactress's granddaughter. She had not yet passed her birthday in the year of this interview, and so was 90 years old. Though understandably prone to tiredness, she was fully lucid and articulate. It should be emphasized that she was only aged two at the time of Tchaikovsky's death (1893) but became very well acquainted with his younger brother Modest (1850-1916), who survived him by 23 years. She repeated certain observations that she had already covered in her published memoirs but these were clearly of overriding significance to her, and I have included them with an extra elucidation of my own. On issues of sexual orientation she seemed entirely free of homophobia, and mentioned that a gay friend had encouraged her to write her autobiography. I refer to her in the following as 'GvM'. I focus on her main comments and provide contextualisation. GvM thought that Nadezhda von Meck, Tchaikovsky's benefactress, did know of his homosexuality and was unperturbed by it. She observed: 'She might have been jealous if he'd been interested in women.'

According to GvM, at some point when Tchaikovsky was resident in Moscow at the home of Nikolay Rubinstein (founder of the Moscow Conservatory, whose staff Tchaikovsky joined as professor of musical theory in 1866, supported by Rubinstein's taking him into his domestic milieu) he went with Rubinstein to a priest to (as GvM put it) 'confess' his homosexuality. I quoted to GvM, so as to invite her response, the following suggestion regarding Tchaikovsky's homosexuality, by Malcolm Hamrick Brown in his review of the first volume of David Brown's musicography of the composer: 'Tchaikovsky made a highly adaptive, even successful adjustment to his psychological condition' [1]. GvM utterly dismissed this. M. H. Brown also observed, and I again cited this to her for her reaction, that in intellectual circles homosexuality was more tolerated in Russia 'during the early decades of the twentieth century, following the censorship reforms of 1905' [2]. GvM expressed doubt that it was so, and said that there was not much, if any, change of attitude. However, she did remark, of Modest Tchaikovsky, that he was much more open about his own homosexuality than the composer had been about his; she observed that Modest often talked of attractive young men, and spoke about them in superlatives. She added that he would 'throw his arms up into the air' when doing so (presumably, as I interpreted her meaning, to underline how attracted to them he felt).

I did not put to her M. H. Brown's statement, concerning the composer: 'But not all prominent homosexuals contemporary with Tchaikovsky seem to have suffered his exaggerated fear of, presumably, exposure and social rejection' [3]. Nevertheless, what she stated about Modest lends some weight to that view. Though nowhere near as prominent as his extremely famous brother, Modest had a considerable and increasing public profile as a playwright in the 1880s and 1890s, and as the librettist not only of the former's operas The Queen of Spades and Iolanta (premiered, respectively in 1890 and 1892 at the Mariinsky Theatre in Saint Petersburg), but also of operas by other composers, including Rachmaninoff's Francesca da Rimini (adapted from Dante, premiered at the Bolshoi Theatre, Moscow, in 1906). Modest's vast biographical study of his brother, published in three volumes in Moscow, 1900-03, though deeply flawed, added greatly to his existing fame. Although GvM did not specify if Modest's extrovert expression of his attraction to young men was solely when speaking of them to his relatives or extended into his dealings with others, she very clearly indicated that he had nothing like his brother's circumspection and world-weary anxieties in these matters. Regarding the performance of Tchaikovsky's operas GvM was critical of productions that strayed far from the historical setting indicated in the musical score. The work she specified as having been (her word) 'ruined' by this was The Queen of Spades, which she felt had suffered from being presented in an unduly modernized and idiosyncratic way.

On how her great-uncle and grandmother's notoriously cleft relationship, once so close, an epistolary outpouring of deep mutual respect and expression of personal concern, lasting some 14 years, ended, Galina von Meck made an eloquent representation. The rupture had occurred in 1890. Galina repeated to me more or less all of the essential details of her account, which appeared about a decade previously in her memoirs, of Tchaikovsky being reconciled to Nadezhda von Meck very shortly before his death [4]. Briefly: Galina said that Tchaikovsky had come to her mother and asked her to tell Nadezhda von Meck that he regretted he had been angry with her. Anna visited Nadezhda in Nice, in September 1893 and relayed to her what he had stated. Nadezhda, in frail health, asked Anna to tell Tchaikovsky that she was not angry with him. Anna took that message back to him and he then told his old Moscow Conservatoire colleague and friend, Nikolay Kashkin, that he and Nadezhda were reconciled. Galina told me this fervently and with evident sincerity. That does not, of course, mean that it was necessarily accurate, but it does indicate that she placed her personal trust in it. She clearly believed that the two friends had healed the breach. Quite apart from whether it adds any confirmation, the account reveals that each item of communication between the participants in these interactions was by word of mouth. No statements seem to have been written down. It might just be that that adds to the plausibility of the account. As the philosopher Ortega y Gasset famously observed: 'To define is to exclude and negate'. Maybe the composer and his old benefactress found enough non-definition through the spoken word to include and forgive?