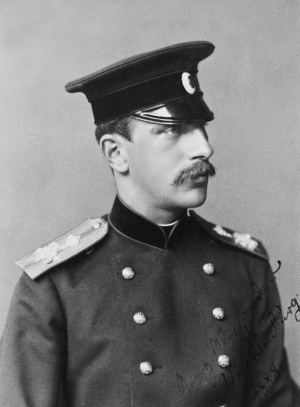 In 1851 George Alexander's father — Duke George August (1824–1876), the youngest son of the ruling Duke of Mecklenburg-Strelitz — married the Russian Grand Duchess Yekaterina Mikhaylovna (1827–1894), and moved to Russia. George Alexander was their eldest son, and he graduated from two German universities, served in the Russian army as Major General, was a commander of the Life Guards Dragoon regiment, and a knight of the order of Saint Andrew the Apostle. In 1890 he married Natalya Vanlyarskaya (1851–1921), who was created Countess von Carlow.

He also known as an amateur composer, a talented musician (cellist and pianist), and the founder of his own string quartet, and these musical interests resulted in a brief correspondence with Tchaikovsky between 1889 and 1891.

2 letters from Tchaikovsky to George Alexander Mecklenburg-Strelitz have survived, dating from 1889 and 1891, both of which have been translated into English on this website:

3 letters from Mecklenburg-Strelitz to Tchaikovsky, dating from 1889 to 1892, are preserved in the Klin House-Museum Archive.