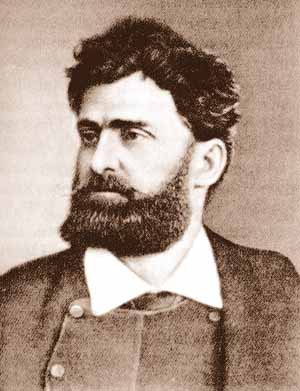 The son of a former violinist in a serf orchestra, Lentovsky became interested in the theatre at an early age, and, with the support of the famous serf actor Mikhail Shchepkin (1788-1863), he left Saratov in 1863 to enrol at the Moscow Theatrical School. In 1865, he debuted on the stage of the Maly Theatre, before leaving Moscow to tour the provincial theatres (including Oryol, Kazan, Saratov, Kharkov, Odessa), participating in dramas, operettas and vaudevilles. In the 1870s he also made his debut as a director, staging various plays and operettas at the Maly Theatre. After resigning from that company's staff in 1882, Lentovsky received a lucrative offer from Ivan Vsevolozhsky, the head of the Imperial Theatres, to become director of opera at the Bolshoi Theatre in Moscow, but he preferred instead to make his own way in showbusiness. Having already started renting the Moscow Hermitage Garden in 1878, he built a new open-air theatre there in 1882 which he called the "Fantastic Theatre" (later the "Antei Theatre"), whilst at the same time presenting operettas and summer spectaculars in parks in Saint Petersburg and Nizhny Novgorod. All these enterprises became possible after the state's monopoly on theatres in the two capitals was revoked in the early 1880s. In 1887, Lentovsky finally realised his ambition of creating a popular theatre in Moscow — the "Skomorokh Theatre" where he built up a strong ensemble. He specialised in elaborate productions, abundant in pyrotechnical displays, explosions and enormous sets (the stage designer Karl Valts worked for him for a while). This lavishness almost brought Lentovsky to the point of ruin in 1895, but he subsequently became stage director for the Mamontov Private Opera in Moscow (1898–1900).

It is not clear when Tchaikovsky first made the acquaintance of Lentovsky, but on 1/13 April 1882, after returning from a long stay in Italy, the composer wrote to his brother Modest, saying that he was involved in "negotiations with the impresario Lentovsky, who has commissioned me to write an opera to be staged during the coming winter season at the new theatre he is building" [1]. Of the three subjects proposed by Lentovsky, Tchaikovsky was most interested in Sadko, based on the folk-tale about the Novgorod gusli player who visits the Kingdom of the Sea, and that very same day he wrote a brief note to Lentovsky to arrange a mutually convenient time for discussing this project [2]. However, it seems that Lentovsky decided that his new theatre would have to concentrate on the more profitable genre of operetta and he soon withdrew his commission, for already in May 1882 Tchaikovsky had resumed work on Mazepa [3]. The next time we hear of Lentovsky in connection with the composer is in the summer of 1886, when Tchaikovsky, together with Karl Albrecht and his wife, went to see a féerie mounted by Lentovsky at the Hermitage Garden in Moscow [4].

In the autumn of 1891, Lentovsky opened a new opera theatre in Moscow, but the inaugural production — a performance of Meyerbeer's Les Huguenots on 25 October/6 November 1891 with a motley French, Italian, and Russian cast singing in different languages — was criticized sharply in the press. A few days later Lentovsky wrote to Tchaikovsky asking him for support:

Truly, what times I have chosen to start out on the serious field of opera!!! Today I have been torn to pieces and spat upon for daring to seek to work, to the best of my abilities and resources, in the sphere of real, true art!

Would you not be able, dear Pyotr Ilyich, to spare a few free minutes tonight and come to see my Huguenots and then tell me if what I have done really deserves this kind of treatment?

By such a kind and invaluable favour and attention on your part you would genuinely oblige and gladden me. May you be my judge! Your sincere admirer,

Tchaikovsky replied that very day, saying that from his friends he had heard nothing but enthusiastic praise for this production of Les Huguenots, and that someone "as gifted, enterprising, and unconditionally honest" as Lentovsky had no need to take notice of spiteful press reviews. The composer explained that he could unfortunately not come to that night's performance of Meyerbeer's opera because he had promised Anton Arensky to attend a production of his opera A Dream on the Volga at the Bolshoi Theatre. However, he promised Lentovsky that the following day he would definitely come to his theatre to hear Emiliya Pavlovskaya in Carmen, and that he would without fail attend the next performance of Les Huguenots [6].

Lentovsky's new opera theatre had an ambitiously wide repertoire: apart from Les Huguenots and Carmen, there were also productions of La traviata, Il trovatore, Rigoletto, Faust, and Cavalleria rusticana. However, the season was very short-lived, since by January 1892 Lentovsky had once again gone bankrupt.

2 letters have survived from Tchaikovsky to Mikhail Lentovsky, dating from 1882 to 1891, both of which have been translated into English on this website:

One letter from Lentovsky to the composer, dating from 1891, is preserved in the Klin House-Museum Archive.