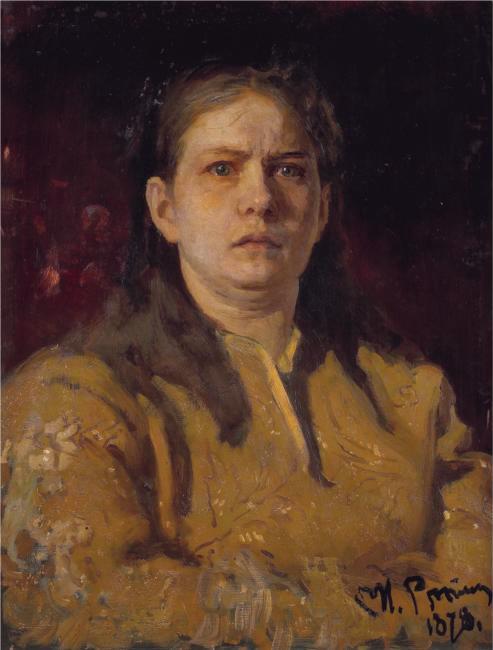 In 1862 she entered the Saint Petersburg Conservatory to study piano with Anton Rubinstein, but left to study privately with the composer Aleksandr Serov(1820–1871), whom she married in 1863. They jointly published a journal Music and Theatre (Музыка и театр), to which she contributed her earliest writings on music.

In the autumn of 1864 Herman Laroche took his friend Tchaikovsky to one of Serov's soirées at his flat, at which the novelist Fyodor Dostoyevsky was also present. Some years Valentina vividly recalled this meeting:

On that occasion there weren't so many visitors at our soirée, but one new face, whom we had never seen at our place before, attracted Serov's attention, and he started to mock with particular zeal the teaching at the Conservatory, attacking all routine and vigorously protesting against the whole academic system. The new visitor, on whose behalf Serov was making such efforts, was Pyotr Ilyich Tchaikovsky. I don't remember what impression all these stormy harangues made on him; he had just completed [sic] his course at the Conservatory, where he had not even made a reputation for himself as an extraordinary student (unlike, say, his friend H. Laroche, who brought him to our soirée); with his frank and youthful eyes he looked on timidly at his host during these heated perorations, and, although he did not say one word of protest, it was clear that he did not agree with Serov. Oper und Drama, 'Programm-Symphonie, and Zukunftsmusik were not hackneyed topics at the time; they weren't even fashionable, and indeed the echoes of Germanic propaganda had not yet reached many people in Russia. But these conversations evidently did not interest Tchaikovsky much: he displayed the same indifference to them as he had done with regard to the preceding ones. Wrapped up as he was in an attentive silence, it was difficult to look into his soul, although his pleasant appearance and especially the sweet expression of his eyes could not fail to awaken the sympathy of anyone who was endowed with the slightest sensitivity. While we were having tea Tchaikovsky walked up to the piano and absent-mindedly ran his fingers over the keys, evidently travelling in his thoughts to some other place far away from what surrounded him. I don't know what induced me to go up to him and tear him away from this state of self-oblivion. All I remember is that I approached him in a brisk and bold manner, with the carefree self-confidence so characteristic of a young, not quite mature person, and asked him in a defiant tone:

— 'Tell me, what are your ideals in music, Pyotr Ilyich?'

He started, turned round to look at me, and replied after a while:

— 'My – my ideals?… But is it really so essential to have ideals in music? I'd never thought about that.'

He looked at me with that clear glance of his which was marked by an almost childlike naivety, and added firmly and distinctly:

When her husband Aleksandr died of a heart attack in January 1871, Valentina (with assistance from Nikolay Solovyev) completed the score of his opera The Power of the Fiend. Although this was not a success, it reawakened her interest in composition. Having met Tchaikovsky in 1864 and thinking very highly of him, it was therefore natural that before the premiere of her first opera, Uriel Acosta, in Moscow in 1885, she should have asked him to look through the score. Tchaikovsky refers to this in a letter to Nadezhda von Meck, replying to his benefactress's question as to whether he had heard Uriel Acosta, which had recently been premiered at the Bolshoi Theatre. Tchaikovsky explains in this letter that the author herself had brought him the score. He had played it through and found it full of awful and clumsy harmonies. Serova had admitted in a conversation with him that these faults were probably due to her late husband's influence, as Aleksandr Serov hated the Conservatory system established by Anton Rubinstein and had rejected any formal training in composition. It seems that Serova had asked Tchaikovsky if he would give her some lessons in harmony, but he had recommended Anton Arensky to her instead [2].