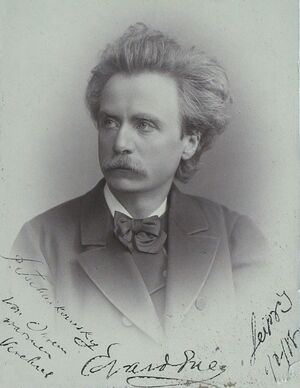 Grieg had a musical upbringing, being taught the piano by his mother at the age of six. In 1858 he was enrolled at the Leipzig Conservatory, where he studied the piano, and made his debut as a concert pianist in 1861 in Karlshamm, Sweden. After his graduation from the conservatory, he spent three years in Copenhagen (1863–1866), before returning to Christiania [now Oslo] in Norway. In 1867, he married his cousin Nina Hagerup (1845–1935), who was a Danish-Norwegian lyric soprano.

On 1 January 1888 [N.S.], Tchaikovsky and Grieg met at the home of Adolph Brodsky in Leipzig (a meeting recorded by Tchaikovsky in Chapter VI of TH 316), and the two men found much to admire in each others' music. As Anna Brodsky recalls in her memoirs, she and her husband would arrange for Tchaikovsky to meet Grieg and his wife Nina at their house as often as possible. After dinner, Nina would sing her husband's songs, much to Tchaikovsky's delight. Grieg made sure to attend all of Tchaikovsky's rehearsals in Leipzig (where on 5 January 1888 [N.S.] the Russian was due to conduct a concert in the Neues Gewandhaus). After the full rehearsal for that concert the day before, Grieg sent Tchaikovsky a card (which has unfortunately not been preserved), enthusiastically praising the Suite No. 1, and Tchaikovsky considered this recognition from "a colleague of genius" such as Grieg to be "the most precious joy that can fall to the lot of an artist". On 6 January [N.S.], Grieg and his wife also attended an all-Tchaikovsky chamber music concert organized by the Leipzig "Liszt]] Society", sitting next to Tchaikovsky, which led to an amusing anecdote (recalled in Chapter VIII of TH 316).

Grieg also travelled specially to Berlin in order to attend the concert Tchaikovsky conducted there on 8 February 1888 [N.S.]. Subsequently they would exchange several letters and postcards in the course of 1888, each writing in German (although Tchaikovsky regularly lamented that his German was so poor that he could not express everything that he wanted to say). Seven such letters have survived (although there were clearly a few more) and have been made available online in facsimile copies and transcriptions by the Bergen Public Library. They testify to the great admiration which they felt for one another. Thus, on 12 April 1888 [N.S.], Grieg wrote to Tchaikovsky from Leipzig: "You cannot imagine what joy my meeting with you has given me. No, not joy, but much more! You have left such a strong impression on me both as an artist and as a human being." Grieg also discussed the possibility of appearing together at some concert later that year, either in Paris or in England, but this did not ultimately work out. On 24 April/6 May 1888, Tchaikovsky replied: "How good, kind, and friendly you are, and how proud I am to have won your friendship! […] I shall never forget the beautiful days we spent together in Leipzig". He also told Grieg that he was writing a new symphony which he intended to dedicate to him: eventually, though, it was not the Fifth Symphony, but the fantasy-overture Hamlet, which he also worked on and completed that summer, that was to be dedicated to Grieg.

During a holiday on the Danish island of Funen, Grieg wrote to Tchaikovsky on 26 May 1888 [N.S.], again expressing the hope that they might see each other at a music festival in Birmingham that autumn: "We must meet again! Be it in Russia, in Norway, or wherever! After all, kindred spirits do not grow on trees!" ("Sympatische Geister wachsen nicht auf den Bäumen!"). Tchaikovsky could not come to Birmingham, but he wrote to Grieg from Klin on 5/17 September (Letter 3655), suggesting that his Norwegian friend should come to Russia that winter and give a concert there. Tchaikovsky also informed him that he had just dedicated to him the fantasy-overture whose instrumentation was soon to be completed. Grieg replied from Bergen on 27 September 1888 [N.S.], telling Tchaikovsky that he was "looking forward like a child to receive the Hamlet-Overture" and promised to send him copies of his In Autumn overture and the first of his Peer Gynt suites. No further letters between the two composers seem to have survived, and they never met again. In June 1893, Grieg was due to receive an Honorary Doctorate from the University of Cambridge together with Tchaikovsky, but he was too ill to attend the ceremony. It was not until 1894 that Grieg could make the journey to England to receive the distinction that his late Russian colleague had been awarded the previous year.

Although Tchaikovsky originally intended to dedicated his Symphony No. 5 to Grieg (1888), he eventually inscribed his overture-fantasia Hamlet, Op. 67, written at the same time, to the Norwegian instead.

3 letters from Tchaikovsky to Edvard Grieg have survived, dating from 1888, all of which have been translated into English on this website:

4 letters from Edvard Grieg to Tchaikovsky, dating from 1888, are preserved in the Klin House-Museum archive.