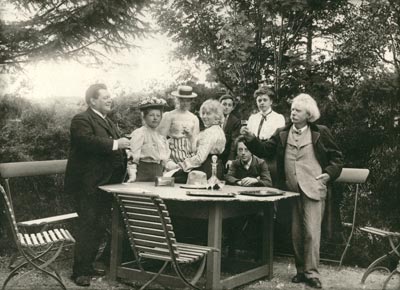 Photograph of the Brodskys' visit in the summer of 1906 to Grieg's family home in Troldhaugen, near Bergen. From left to right, the figures standing in the foreground are: Adolph Brodsky, his wife Anna, Nina Hagerup Grieg, and Edvard Grieg

The daughter of a Russian nobleman who owned estates in southern Russia, Anna married at Sevastopol in 1882, and accompanied her husband to the United States in 1891, eventually settling with him in Manchester, England.

Tchaikovsky was introduced to Anna Brodsky during his tour of Leipzig in 1888, and it was at their home that he met Edvard Grieg and Johannes Brahms on New Year's Day 1888 [N.S.]. Anna Brodsky would later write a fascinating account of life on the road with her husband, whom she accompanied on his many tours, as well as of this memorable meeting between the three composers [1]:

In the winter of 1887 the Gewandhaus Committee invited Tschaikovsky to conduct some of his own compositions, and as he had received similar invitations from other towns in Germany, he decided to accept them and so, for the first time, came abroad to conduct his own works. He arrived in Leipzig on Christmas Eve: it was a cold frosty evening, and the snow lay thick on the ground. My husband went to the station to meet Tschaikovsky, and my sister Olga and her little son who were our guests at that time helped me to prepare our Christmas tree. We wished it to be quite ready before Tschaikovsky arrived, and to look as bright as possible as a welcome for him. As we were lighting the candles we heard the sound of a sledge, and soon after Tschaikovsky entered the room followed by Siloti and my husband.

I had never seen him before. Either the sight of the Christmas tree or our Russian welcome pleased him greatly, for his face was illuminated by a delightful smile, and he greeted us as if he had known us for years. There was nothing striking or artistic in his appearance, but everything about him — the expression of his blue eyes, his voice, especially his smile, spoke of great kindliness of nature. I never knew a man who brought with him such a warm atmosphere as Tschaikovsky. He had not been an hour in our house before we quite forgot that he was a great composer. We spoke to him of very intimate matters without any reserve, and felt that he enjoyed our confidence.

The supper passed in animated conversation, and, notwithstanding the fatigues of his journey, Tschaikovsky remained very late before returning to his hotel. He promised to come to us whenever he felt inclined, and kept his word.

Among his many visits one remains especially memorable. It was on New Year's Day. We invited Tschaikovsky to dinner, but, knowing his shyness with strangers, did not tell him there would be other guests. Brahms was having a rehearsal of his trio in our house that morning with Klengel and A. B. — a concert being fixed for the next day. Brahms was staying after the rehearsal for early dinner. In the midst of the rehearsal I heard a ring at the bell, and expecting it would be Tschaikovsky, rushed to open the door. He was quite perplexed by the sound of music, asked who was there, and what they were playing. I took him into the room adjoining and tried to break, gently, the news of Brahms' presence. As we spoke there was a pause in the music; I begged him to enter, but he felt too nervous, so I opened the door softly and called by husband. He took Tschaikovsky with him and I followed.

Tschaikovsky and Brahms had never met before. It would be difficult to find two men more unlike. Tschaikovsky, a nobleman by birth, had something elegant and refined in his whole bearing and the greatest courtesy of manner. Brahms with his short, rather square figure and powerful head, was an image of strength and energy; he was an avowed foe to all so-called "good manners". His expression was often slightly sarcastic. When A. B. introduced them, Tschaikovsky said, in his soft melodious voice: "Do I not disturb you?"

"Not in the least", was Brahms' reply, with his peculiar hoarseness. "But why are you going to hear this? It is not at all interesting".

Tschaikovsky sat down and listened attentively. The personality of Brahms, as he told us later, impressed him very favourably, but he was not pleased with the music. When the trio was over I noticed that Tschaikovsky seemed uneasy. It would have been natural that he should say something, but he was not at all the man to pay unmeaning compliments. The situation might have become difficult, but at that moment the door was flung open, and in came our dear friends — Grieg and his wife, bringing, as they always did, a kind of sunshine with them. They knew Brahms, but had never met Tschaikovsky before. The latter loved Grieg's music, and was instantly attracted by these two charming people, full as they were of liveliness, enthusiasm, and unconventionality, and yet with a simplicity about them that made everyone feel at home. Tschaikovsky with his sensitive nervous nature understood them at once. After the introductions and greetings were over we passed to the dining room. Nina Grieg was seated between Brahms and Tschaikovsky, but we had only been a few moments at the table when she started from her seat exclaiming: "I cannot sit between these two. It makes me feel so nervous".

Grieg sprang up, saying, "But I have the courage"; and exchanged places with her. So the three composers sat together, all in good spirits. I can see Brahms now taking hold of a dish of strawberry jam, and saying he would have it all for himself and no one else should get any. It was more like a children's party than a gathering of great composers. My husband had this feeling so strongly that, when dinner was over and our guests still remained around the table smoking cigars and drinking coffee, he brought a conjurer's chest — a Christmas present to my little nephew — and began to perform tricks. All our guests were amused, and Brahms especially, who demanded from A. B. the explanation of each trick as soon as it was performed [...]

We were sorry when our guests had to go. Tschaikovsky remained till the last. As we accompanied him part of the way home A. B. asked how he liked Brahms' trio.

"Don't be angry with me, my dear friend", was Tschaikovsky's reply, "But I did not like it".

A. B. was disappointed, for he had cherished a hope that a performance of the trio in which Brahms himself took part, might have had a very different effect and have opened Tschaikovsky's eyes to the excellence of Brahms' music as a whole. Tschaikovsky had very few opportunities of hearing it, and that was perhaps one reason why it affected him so little.

During Tschaikovsky's frequent visits to Leipzig we saw him in every possible mood, in all his ups and downs, and always loved him more as we knew him better.

Being of an exceedingly nervous temperament, he passed from one mood to another very rapidly. One night I remember well. It was the evening before his début in Leipzig. A. B. was absent, playing at Cologne. My sister Olga and I had finished our supper some time before when Tschaikovsky suddenly called on us, apologising for being so late. We were struck by the sadness of his expression and thought he must have heard some bad news. We gave him a warm welcome without asking any questions, and did out utmost to cheer him. We soon succeeded, and he told us that it was the thought of tomorrow's concert which had depressed him so greatly, and that, if he could, he would have been glad to give up all his engagements and return to Russia immediately.

Such excitements were often more than he could bear; they brought on moods of terrible depression in which he seemed to see death in the form of an old woman standing behind his chair and waiting for him. Tschaikovsky often spoke of death and still more often thought of it.

He was greatly attached to life and loved many things passionately: people he knew, natural beauty, and works of art. He had no firm belief in a future life and could never be reconciled to the thought of parting with all that was beautiful and dear to him.

On another occasion his extreme sensitiveness revealed itself in a different way. A telephone wire had just been laid between Berlin and Leipzig. Tschaikovsky and Brodsky arranged to speak through the telephone, the former from Berlin and the latter from Leipzig. At the appointed time Brodsky went to the telephone office hoping to have a chat with his friend, but he had only uttered a few words when he heard Tschaikovsky say in a trembling voice, "Dear friend! Please let me go. I feel so nervous".

Later on Tschaikovsky explained to us that as soon as he heard his friend's voice and realised the distance between them his heart began to beat so violently that he could not endure it.

Sometimes Tschaikovsky would send us a telegram from Berlin, or any other town where he happened to be, to this effect: "I am coming to see you. Please keep it secret". We knew well what this meant: that he was tired and homesick and in need of friends. Once after such a telegram Tschaikovsky arrived just in time for dinner; at first we had him quite to ourselves, but after dinner, as he was sitting in the music room with his head leaning on his hand as was his custom, the members of the Brodsky Quartet quietly entered the room bringing their instruments with them as had been previously arranged. They sat down in silence and played Tschaikovsky's own String Quartet No. 3, which they had just carefully prepared for a concert. Great was Tschaikovsky's delight! I saw the tears roll down his cheek as he listened, and then, passing from one performer to the other, he expressed again and again his gratitude for the happy hour they had given him. Then turning to Brodsky he said in his naïve way: "I did not know I had composed such a fine quartet. I never liked the finale, but now I see it is really good".

This time he did not reproach us for having disobeyed his wish about the incognito.

He was very fond of meeting the Griegs at our house and, knowing this, we arranged it as often as possible. The dinners were usually followed by music. Madame Grieg would sing her husband's beautiful songs and he himself would accompany her at the piano. She always put great enthusiasm in her singing and stirred us deeply. It was a treat to hear her, and Tschaikovsky never failed to express his delight.

The composers soon became intimate friends and, as a token of his great esteem, Tschaikovsky dedicated to Grieg his Overture to "Hamlet", a tribute which the latter highly esteemed.

3 letters from Tchaikovsky to Anna Brodsky have survived, dating from 1888 to 1891, all of which have been translated into English on this website:

Letter 4488 was addressed jointly to Anna and her husband Adolph Brodsky.

5 letters from Anna Brodsky to the composer, dating from around 1888, are preserved in the Klin House-Museum Archive.