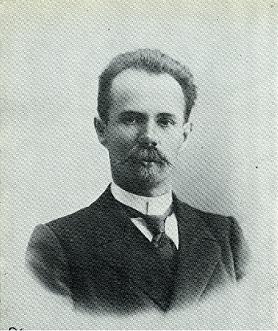 The eldest son of the piano teacher and music teacher Eduard Konstantinovich Konyus (1827–1902), and brother to Yuly Konyus and Lev Konyus, Georgy graduated from the Moscow Conservatory, where he studied the piano with Paul Pabst and composition with Sergey Taneyev and Anton Arensky, he was instructor of music theory at the same institution between 1891 and 1899. He later became professor of composition (1902–1906) and director (1904–1905) of the Moscow Philharmonic Society's music and drama institute, as well as professor of composition (1902–1919) at the Saratov State Conservatory.

Following the revolution, he remained in Russia as a member of the music section of the National Commissariat of Culture (1919–20), and then returned to the Moscow Conservatory as professor (from 1920 until 1933) where he founded a department of music analysis. In 1922 he became a leading figure at the State Institute for Musical Research, and lectured in Germany and France during the 1920s. He left a small number of compositions, and essays on music theory.

5 letters from Tchaikovsky to Georgy Konyus have survived, dating from 1891 to 1893, all of which have been translated into English on this website:

5 letters from Georgy Konyus to the composer, also dating from 1891 to 1893, are preserved in the Klin House-Museum Archive.