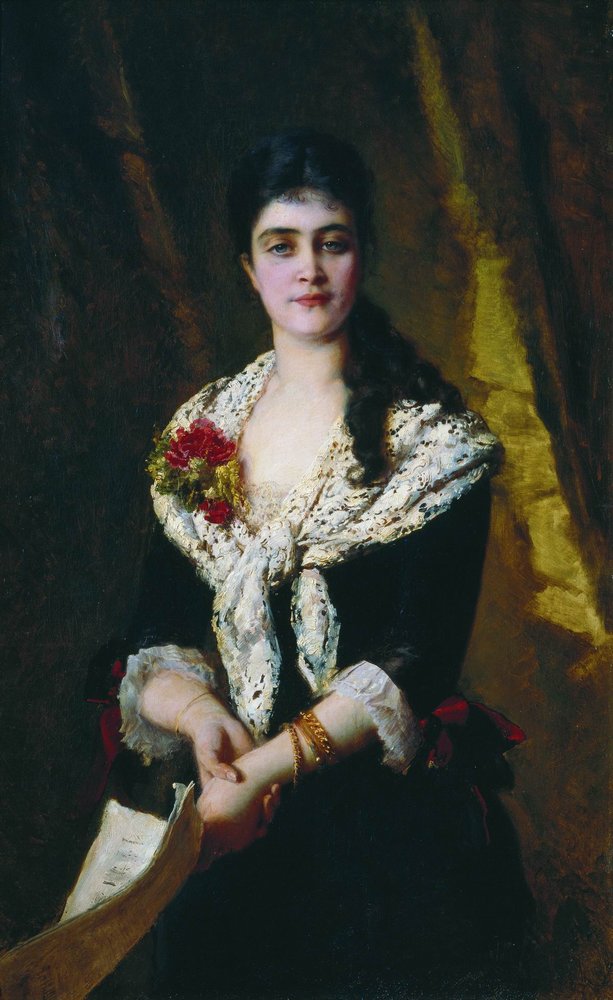 She was the daughter of the engineer and writer Valerian Aleksandrovich Panayev (1824–1899) and his wife Sofia Mikhaylovna (b. Melgunova). Aleksandra and her family were immediately captivated by Tchaikovsky's first set of songs — the Six Romances, Op. 6 — when they were published in 1870, and a few years later she went to Paris to take singing lessons with Pauline Viardot. Tchaikovsky intended to call on her when he briefly stopped by in Paris in January 1876, but he had then changed his mind. In 1877, she completed her studies with Madame Viardot and returned to Russia but did not yet become a professional singer. During the 1878–79 season, however, Aleksandra's mother allowed her to perform in concerts organized to raise funds for soldiers wounded in the Russo-Turkish War, and she would sing mainly romances by Tchaikovsky. She also became friends with the composer's brother Anatoly, who apologized for Tchaikovsky's shyness and reluctance to make her acquaintance.

Shortly after the piano score of Yevgeny Onegin was published by Jurgenson in October 1878, Aleksandra obtained a copy and became so enthusiastic about the music that she learnt the entire role of Tatyana by heart and persuaded the singer and socialite Yuliya Abaza to organize a private performance of the opera (from the vocal-piano reduction) at her salon in Saint Petersburg. This took place on 6/18 March 1879, with Aleksandra as Tatyana, Ippolit Pryanishnikov as Onegin, Yelizaveta Lavrovskaya as Olga, and Grand Duke Konstantin Konstantinovich accompanying at the piano. A few days later Aleksandra and her father travelled to Moscow to attend the premiere of Tchaikovsky's opera at the Maly Theatre on 17/29 March 1879. Anton Rubinstein, who was also present in the audience and who had always supported Aleksandra's talent, made a clumsy attempt to introduce Tchaikovsky to his fervent admirer from Saint Petersburg, but this ended in the composer running away from her box at the theatre. A few days later, however, Tchaikovsky departed for Saint Petersburg with his brothers Anatoly and Modest, and together they called on the Panayevs. Tchaikovsky was delighted by her singing of various arias from Mozart's operas, as well as from Bellini's La sonnambula and after that the ice was finally broken [1].

Aleksandra was one of the initiators of the all-Tchaikovsky concert which took place in Saint Petersburg on 25 March/6 April 1880 and which was attended by such illustrious guests as Grand Duchess Mariya Fyodorovna and the writer Ivan Turgenev. At this concert she herself sang the Letter Scene from Yevgeny Onegin and various romances, and when she noticed that the composer was secretly in the audience (up in the musicians' gallery) she convinced him to come down and take the applause. Later that year Tchaikovsky would dedicate his set of Seven Romances, Op. 47, to her.

As she explains in her memoirs, Tchaikovsky early in 1884 had asked her to sing Tatyana in the first production of Yevgeny Onegin at the Mariinsky Theatre in Saint Petersburg later that year, but her betrothal to the composer's cousin Georgy Kartsov (1862–1931) ruled this out. Aleksandra did, however, manage to attend the first performance of Onegin at the Mariinsky Theatre on 19/31 October 1884 and "with pain and envy I watched Pavlovskaya, who was a really, really good Tatyana" [2]. On 7/19 January 1885 Aleksandra and Kartsov were married, and thereafter she took the surname Panayeva-Kartsova. She continued to sing, though, and even secured an engagement with the Italian Opera in Saint Petersburg. At a concert conducted by Tchaikovsky there on 5/17 March 1887 she sang Kuma's first aria from The Enchantress and several romances. Due to illness she could not attend the first performance of the Symphony No. 6 on 16/28 October 1893, conducted by the composer himself, but in her memoirs she recounts a conversation which Tchaikovsky had with his favourite cousin Anna Merkling after the concert and which sheds valuable light on the meaning of the Pathétique (for more details, see the entry on Anna Merkling). Alexandra was so deeply affected by the composer's death that she felt it beyond her strength to attend any of the concerts held in his memory, and for two years she could not bring herself to sing anything by Tchaikovsky.

Aleksandra Panayeva-Kartsova died during the siege of Leningrad in 1942, aged 88.