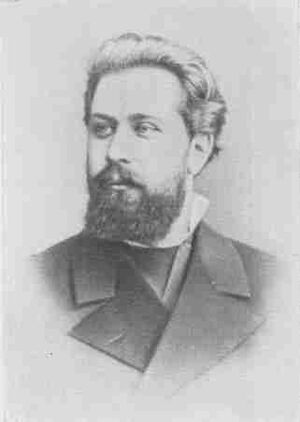 He was also an experienced administrator, and went on to form his own opera company on a co-operative basis (the first of its kind in Russia). Tchaikovsky took a great interest in Pryanishnikov's enterprise and during his visits to Kiev in 1890-92 he would always take the time to speak with him and his colleagues about their plans for the future. The composer also attended the first performance of his opera The Queen of Spades in Kiev, staged by Pryanishnikov's company on 19/31 December 1890 (just twelve days after the opera's premiere in Saint Petersburg). When Pryanishnikov found out that the Kiev Opera had been rented out to another company for the 1892/93 season, he decided to relocate with his entire troupe, orchestra and chorus included, to Moscow, but in order to test the waters and see if they could actually thrive there, he wanted first to attempt a brief opera season in Moscow, lasting about a month. Pryanishnikov discussed this with Tchaikovsky during the composer's last stay in Kiev (17/29 December 1891 to 23 December/4 January 1892), and although Tchaikovsky was sceptical about the prospects of a private opera company in Moscow, he offered to help them by conducting some of their performances during this trial season (in May 1892), alongside the company's principal conductor Josef Přibík. Tchaikovsky's generous offer was enthusiastically taken up by the singers, and Pryanishnikov later recalled how their ambitious venture worked out:

I told Tchaikovsky that from our company's large repertoire he could choose those works of his which he wanted to conduct, but he protested against this and said that he was quite fed up with his own operas, and, besides, he wanted to prove that he was capable of conducting not just his own works (these are his own words).

Of the eight operas which had been scheduled for Moscow he chose three to conduct, one being his own Onegin and two by other composers — his favourite operas, as he said: a Russian one — The Demon — and a foreign one — Faust. To tell the truth, it must be said that he was afraid of taking on less familiar operas, such as Prince Igor or The Maccabees.

On the preliminary bill-board announcing our season at the Shelaputin Theatre in Moscow, the list of performers included the following line in printed letters:

I can't remember now how many times in the course of the month the three operas conducted by Pyotr Ilyich were staged, but in any case it must have been at least three times for each opera, and it goes without saying that at every performance in which he took part the theatre was packed to the rafters, and that each time he received standing ovations from both the audience and the artists" [1].

In fact, Tchaikovsky conducted each one of these operas just once: Gounod's Faust on 20 April/2 May, Rubinstein's The Demon on 22 April/4 May, and his own Yevgeny Onegin on 26 April/8 May 1892. Despite Tchaikovsky's invaluable endorsement, Pryanishnikov's opera company was only able to make it through one winter season in Moscow (1892–93), after which the enterprise folded up. Pryanishnikov was also a singing teacher, his students including the tenor Nikolay Figner, the soprano Yevgeniya Mravina (1864-1914), and the mezzo-soprano Mariya Slavina.

2 letters from Tchaikovsky to Ippolit Pryanishnikov have survived, dating from 1890 to 1892:

29 letters from Pryanishnikov to the composer have survived, dating from 1889 to 1892, of which 28 are preserved in the Klin House-Museum Archive, and one in the Russian State Archive of Literature and Art in Moscow.