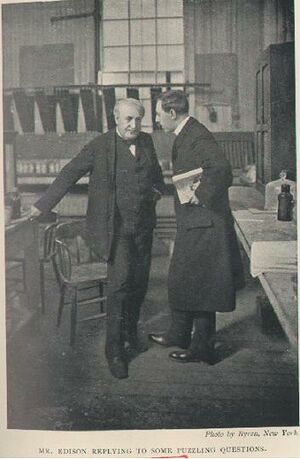 A native of the English city of Chester, he lost his father, William Jones, at an early age. Francis and his mother, Anne, who was of Irish stock, moved to Devon during the 1880s where Mrs. Jones became a lodging house proprietor. After completing his school education Francis worked as a tutor for a few years, but eventually embarked upon a career as a music writer and journalist for The Strand Magazine. He was also involved in the Young Men's Christian Association (YMCA) at Torquay in Devon.

On 16 January 1893 [N.S.], Jones wrote to Tchaikovsky (in English) explaining that he was working on an article entitled "How Composers Compose" and asked him to send a small fragment of one of his manuscripts, as well as to answer a series of questions for his article. Jones pointed out that he had already contacted a number of composers — including Grieg, Saint-Saëns, Massenet, and Gounod — regarding the same query, and they had all kindly obliged. At the end of his letter Jones promised to forward Tchaikovsky a copy of his article. After receiving Tchaikovsky's detailed and helpful reply [3], Jones wrote to him again on 27 February [N.S.], apologizing for having to use English again as he was not proficient in French. He thanked the composer for the musical autograph he had sent and asked him to clarify which work it was from [4]. Tchaikovsky replied on 28 February/12 March 1893: "You ask me about where the fragment I sent you is taken from. Unfortunately I've completely forgotten what musical phrase I communicated to you. Please let me know" [5]. It seems that Jones, not wishing to trouble the composer further, did not return the autograph to him for clarification, and no more correspondence between the two men has come to light. He had very likely realised that, since Tchaikovsky in his first letter had named The Queen of Spades as his finest work, the fragment must have been taken from that opera.

Jones's article "How Composers Compose", containing the replies of various British and European composers to his questions on the creative process, and illustrated with facsimile reproductions of portions of their manuscripts, finally appeared in two instalments in the February and April 1894 issues of The Strand Magazine. The section on Tchaikovsky appeared at the very end of the second instalment. It began with a warm tribute — "Klin, near Moscow, was the home of one of the busiest of men. It is here that the late Russian composer Tschaïkowsky, lived and worked, devoting the greater part of the day to his art" — and after the concluding paragraph — "Of his own compositions, Tschaïkowsky considered his opera La Dame de Pique the best work he had ever done, an opinion which is shared by many of his admirers" — there appeared a facsimile of the beautifully written quotation from the finale of The Queen of Spades which Tchaikovsky had sent him a year earlier [6].

After moving to London, Jones emigrated to New York in 1902, where he worked as a journalist for The Strand Magazine and Wide World Magazine — a career which saw him eventually rise to the position of editor and American representative of these two British monthly illustrated publications. While still a junior journalist, Jones found the time to write his first book — one which reflected his abiding interest in music and his Christian faith: Famous Hymns and their Authors (London, 1902). For this ambitious project he had followed a similar procedure to that of his article "How Composers Compose": he interviewed (often by correspondence) both contemporary British and American hymnists, and also the descendants of the authors of famous hymns from the eighteenth and early nineteenth century. Moreover, the book contained facsimile reproductions of the opening verses of many of these hymns. Jones dedicated the book to his mother, who had taught him as a child many of the hymns it discusses.

Jones's decision to move to America, even though he still returned to Britain occasionally for short visits, allowed him to realise another dream of his: to meet the inventor Thomas Alva Edison (1847–1931), an idol of his boyhood, about whom he would go on to write a biography: Thomas Alva Edison: Sixty Years of an Inventor's Life (New York / London, 1907). Jones was probably unaware that Tchaikovsky had been among the first to pay tribute to one of Edison's most important inventions: the phonograph (see the Endorsement of Thomas Edison's "Phonograph", written in 1889), but he would certainly have appreciated the connection! In the foreword to the second and revised edition (New York and London, 1924), Jones explained his motivation for writing this book:

This Foreword is in the nature of a confession. Thomas Alva Edison has always possessed a great fascination for me. Even when a boy in an English school I read everything concerning him that I could find. On the wall of my bedroom was placed that striking picture of him by Outcault (I think) which showed the “Wizard” listening to his first phonograph. I saw that portrait long before I ever had an opportunity of listening to a “talking machine,” and visualised the inventor as a mortal who lived somewhere on earth, perhaps, but who was seen only by the elect. I thought of him as her Indian subjects are said to have thought of Queen Victoria!

When as a very young man I got my first engagement on a London magazine, and was given an assignment to write an article on Edison, the editor went to some little trouble to tell me who he was. He advised me to look him up in the Metropolitan Library or, better still, to consult the “morgue” of the London Times. I had no need to do either. The article was written without consulting any reference whatever, and the editor was kind enough to say that I "might have been personally acquainted with the inventor".

A couple of years later the publishing firm with which I was associated decided to send a man to America to write articles on this country for the delectation of English readers. I was offered the position. For many reasons I was not very enthusiastic about it, but the thought flashed through my mind: perhaps I shall see Edison! This factor helped me to decide. I hesitated no longer but packed my trunk and took ship for New York.

About a month after my arrival I wrote to Mr. Edison asking for an interview in behalf of my magazine. I did not get an immediate reply and had almost made up my mind that the inventor really was some supernatural being, when a pleasant note came saying that Mr. Edison would be pleased to see me at such and such a time. I remember it was a beautiful spring morning when I arrived in Orange and the apple and pear trees were full of bloom. Everything was so sunny and bright that I felt satisfied that the great event of my life was to take place. I reached the Laboratory about eleven o'clock and knocked at the little office just outside the gates. A workman let me in, and presently Mr. Randolph, the great man's Secretary, appeared and ushered me into the library where he said Mr. Edison would meet me in a few moments.

Left alone I felt what the French call "a great emotion". I know that when the inventor made his appearance at the door my knees knocked together. But he hurried forward with such a genial smile on his face, such a kindly look in his eyes, such a welcome in his outstretched hand, that all my nervousness vanished. I felt as though I were greeting an old friend. We sat and talked for an hour. When the interview was over, he told me that I might come whenever I wished, and that any information he or his associates could give me would be at my service.

That was the first of many visits and each visit increased my admiration for this wonderful man. One cannot speak to Edison for five minutes without realising that he is in the presence of a very unusual personality — a man who is already among the immortals. And yet he laughs and tells amusing stories in a way that is very human and wholly delightful. Born of these intimate talks came a great desire to depict Edison as I knew him for others; and one day I asked him if he would have any objection to my publishing the results of my many interviews in book form. He had none. In fact he gave me full permission to consult everything there was concerning him in the Library and put at my disposal a mass of valuable material. I set to work at once and for many weeks occupied a desk in the Edison library where I was left undisturbed and free to use anything that might prove useful.

I have made this frank personal confession in the first person, to explain why it was that I wrote a Life of Edison. It has been penned because of my intense admiration for him and as a modest tribute to the man who must be regarded as the greatest inventive genius of all times" [7].

There are indications that Francis Arthur Jones may still have been active as a literary agent in New York in the early 1930s [8], but these are not conclusive and nothing is known to us about his later years.

Two letters from Tchaikovsky to Francis Arthur Jones have survived, dating from 1893, both of which have been translated into English on this website: