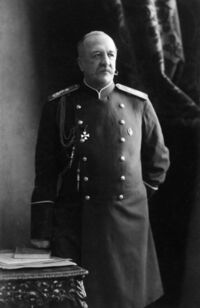 Vorontsov-Dashkov's early military career saw him take part in the conquest of Central Asia in the 1860s, and in 1866 he was promoted to the rank of major-general, later commanding the Hussar Life-Guards' Regiment (1867–74). In 1881 Emperor Alexander III appointed him as Minister of Imperial Properties at the Russian Court, and under Nicholas II he became a state councillor (1897–1905). In 1905 he was appointed Viceroy of the Caucasus, where he remained until his death in 1916.

One letter from Tchaikovsky to Illarion Vorontsov-Dashkov has survived, dating from 1887, and has been translated into English on this website: