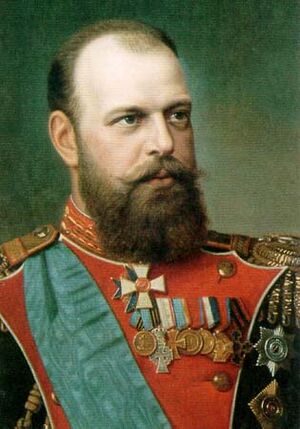 Grand Duke Aleksandr Aleksandrovich was the second son of Alexander II (1818–1881) by his wife Mariya Aleksandrovna (b. Marie of Hese, 1824–1880). On the death of his elder brother Nikolay in 1865, he unexpectedly became heir to the Russian throne, and carried out his brother's wish that he should marry his fiancée, the Danish Princess Maria Dagmar (1847–1928), who subsequently became the Grand Duchess Mariya Fyodorovna. Tchaikovsky was commissioned to write a Festival Overture on the Danish National Anthem, Op. 15, as part of the wedding festivities, and he was rewarded for his efforts with a set of jewelled cuff-links, which he promptly sold on to Aleksandr Dubuque.

Following the assassination of his father In March 1881, Aleksandr succeeded to the Russian throne as His Imperial Majesty Alexander III. For the coronation celebrations in May 1883, Tchaikovsky was commissioned to write a festival cantata — entitled Moscow — and a Coronation March for orchestra.

Three of Tchaikovsky's works were dedicated to Alexander III.

One letter from Tchaikovsky to Alexander III has survived, dating from 1887, and has been translated into English on this website: