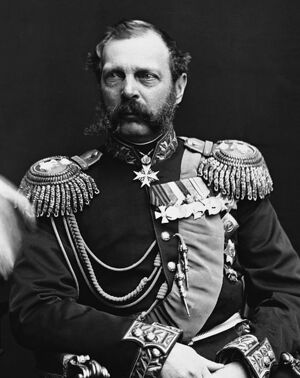 Emperor ("Tsar") of Russia (b. 17/29 April 1818 in Moscow; d. 1/13 March 1881 in Saint Petersburg), born Aleksandr Nikolayevich Romanov (Александр Николаевич Романов), with the title Grand Duke; upon his accession to the Russian throne in 1855, he became His Imperial Majesty Alexander II (Александр II Николаевич).

Alexander's most important achievement was the emancipation of serfs in 1861, for which he became known as "Alexander the Liberator" (Алексаандр Освободитель).

When, in 1880, Tchaikovsky was commissioned to write a composition to be performed at the All-Russian Arts and Industry Exhibition scheduled to take place in Moscow the following year, he was offered the choice of writing an overture to open the exhibition; an overture for the silver jubilee of Alexander II; or, a cantata for the consecration of the nearly-completed Cathedral of Christ the Saviour, which was built to commemorate Napoleon's defeat against Russia in 1812 [1]. He reluctantly chose the latter option, complaining that "It is impossible to set about without repugnance such music which is destined for the glorification of something that, in essence, delights me not at all. Neither in the jubilee of the high-ranking person (who has always been fairly antipathetic to me), nor in the Cathedral, which again I don't like at all, is there anything that could stir my inspiration" [2]. The resulting overture The Year 1812 nevertheless became one of his most popular works.

Earlier that year, and with similar reluctance, Tchaikovsky had been commissioned to write a short orchestral piece entitled Montenegro, for Alexander's silver jubilee celebrations, at which a series of tableaux, depicting the principal events of the Emperor's reign were to be performed, accompanied by music commissioned from all the leading Russian composers, including Anton Rubinstein, Nikolay Rimsky-Korsakov, César Cui, Eduard Nápravník, Aleksandr Borodin and Nikolay Solovyev. "Needless to say, all I could come up with was the most filthy noise and crashing about", Tchaikovsky told his brother Anatoly immediately after completing the piece [3].

The performance of Montenegro had been scheduled to take place at the Bolshoi Theatre in Saint Petersburg on 10/22 February 1880. However, on the evening of 5/17 February an attempt was made to assassinate Alexander at the Winter Palace in the Russian capital, which left the Tsar unharmed but killed eleven other people, and left thirty more injured. As a result the planned jubilee celebration events were permanently cancelled, and Tchaikovsky's music for Montenegro was never performed, and is now lost.

At the end of 1879 another attempt had been made on the Tsar's life in Saint Petersburg, when the Narodnaya Volya (People's Will), a radical revolutionary group which hoped to ignite a social revolution, organised an explosion on the railway from Livadiya to Moscow. They missed the emperor's train, but Tchaikovsky was shocked to learn of these events while he was staying in Paris, writing to his father: "Yesterday came the news of the attempt on the life of the sovereign, which caused a great sensation. Without exception the newspapers expressed great sympathy for the sovereign, and disgust at the perpetrators' heinous crime. How awful for Russia! Where will it all end?" [4].

The Narodnaya Volya ultimately succeeded in their attempts, and claimed the Emperor's life on 1/13 March 1881 when one of their members threw a bomb at the imperial carriage as it made its way through Saint Petersburg. Tchaikovsky's relations with his son and successor, Alexander III, proved to be much more amicable.