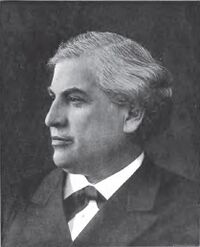 After graduating from classes in business studies, Melnikov's involvement with his local church choir led him to take singing lessons with Gavriei Lomakin (1812–1885). Five years later, in 1866, he travelled to Italy for further training, and made his debut at the Mariinsky Theatre in Saint Petersburg in 1867 playing Ricardo in Bellini's Il Puritani. He remained one of the lead soloists at the Mariinsky until 1890, and premiered several roles in Tchaikovsky's operas — Vyazminsky in The Oprichnik (1874), The Devil in Vakula the Smith (1876), Prince Nikita in The Enchantress (1877), and Tomsky in The Queen of Spades (1890). He also premiered the title roles in Musorgsky's Boris Godunov (1874) and Borodin's Prince Igor (1890).

From 1890 to 1892 Melnikov served as a director at the Mariinsky Theatre. In 1890, together with Fyodor Becker, he founded "Free Choral Classes" in Saint Petersburg, for which he commissioned Tchaikovsky to write Three Choruses (1891).

Tchaikovsky dedicated three of his works to Ivan Melnikov: