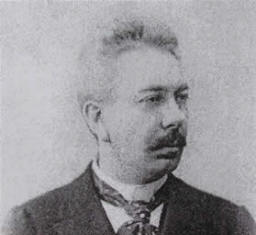 After receiving lessons from his father, the composer and performer August Pabst (1811–1885), Paul gave his first public recitals at the age of 11, studying with Anton Door at the Academy of Music and Lyric Arts in Vienna, and later in Weimar with Franz Liszt. From 1875 he taught piano in Riga, and in 1878 was invited by Nikolay Rubinstein to teach piano at the Moscow Conservatory, where he became professor of piano in 1881.

Tchaikovsky was a great admirer of Pabst's virtuosity, and was particularly impressed by his Paraphrase (1880) on themes from the opera Yevgeny Onegin. As well as his virtuosic transcriptions, Pabst also composed many smaller works, almost exclusively for piano.

In 1893, Tchaikovsky dedicated the piano piece Polacca de Concert — No. 7 of the Eighteen Pieces, Op. 72 — to Paul Pabst.

One letter from Tchaikovsky to Paul Pabst has survived, dating from 1887, and has been translated into English on this website:

One undated telegram from Paul Pabst to Tchaikovsky is preserved in the Klin House-Museum archive.