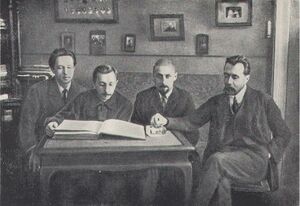 Born into a Moscow merchant family, Sergey Popov inherited a large textile factory near Voskresensky [now Istria]. Although his early interest was in art, and he received no formal musical education, from the age of twenty he began to undertake his own musicological research in various musical and academic institutions in Moscow. Here he assisted with the publications of complete collections of works by Russian composers, and became an acknowledged authority in the field of music.

Popov was closely related to Nikolay Zhegin, the director of the Tchaikovsky House-Museum in Klin. In 1920 he discovered the instrumental, choral, and solo parts for Tchaikovsky's first opera The Voeyevoa in the library of the Bolshoi Theatre in Moscow [1], Over the next thirteen years, with the assistance of the musicologist Boris Asafyev, he worked on restoring the opera's full score based on these rediscovered parts, as well as sketches, fragments of the autograph, and pages from authorised copies of the full score [2]. He also helped to prepare first editions of Tchaikovsky's student overtures in C minor and F major for publication [3], and published the composer's correspondence with Aleksandra and Nikolay Hubert, Vasily Bessel, Mikhail Ippolitov-Ivanov, Varvara Zarudnaya, and Aleksandr Ostrovsky.

However, during the 1930s Popov was subjected to increasing persecution by the Soviet authorities for his privileged social background. On 18 September 1937 he was arrested on false charges, leading to his execution on 13 November the same year [4]. His large collection of books and manuscripts (including his unpublished reconstruction of The Voeyevoa) was partially destroyed, with the remainder being stolen or sold off by the state.