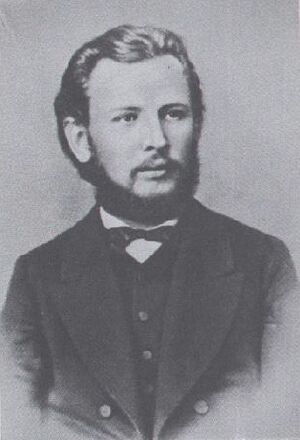 Nikolay Kashkin did not come from a musical family (he was the son of a bookseller), but he taught himself music, and by the age of thirteen he was giving piano lessons. In 1860 he studied piano under Aleksandr Dubuque, and in 1863 he became a tutor in the musical classes arranged by the Russian Musical Society. In 1865 he married Yelizaveta Kulneva.

When the Moscow Conservatory opened in 1866, he worked alongside Tchaikovsky as professor of piano and of music theory and history, serving from 1866 to 1896 and from 1905 to 1908.

He was a prolific music critic, contributing primarily to the Russian Register (Русские ведомости) and the Moscow Register (Московские ведомости), sometimes under the pseudonym "Nikolay Dmitriyev" (Николай Дмитриев). He also produced a number of books on Russian music, as well as some of the earliest reminiscences about Tchaikovsky.

Nikolay Kashkin was a close friend of Tchaikovsky, and did much to promote his music.

6 letters from Tchaikovsky to Nikolay Kashkin have survived, dating from 1877 to 1891, of which those highlighted in bold have been translated into English on this website:

9 letters from Kashkin to the composer, dating from 1879 to 1890, are preserved in the Klin House-Museum Archive.