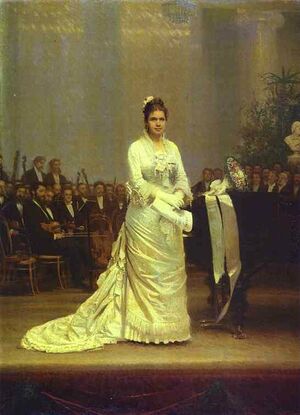 After studying at the Elizavetinsky Institute in Moscow, she graduated from the Saint Petersburg Conservatory in 1867. She sang with the Imperial Opera Company in Saint Petersburg from 1868 to 1872 and 1879 to 1880, and with the Bolshoi Theatre in Moscow from 1890 to 1891. During the 1870s she studied with Pauline Viardot-Garcia in Paris, and also toured widely in Western Europe.

In May 1877, she suggested the subject for Tchaikovsky's opera Yevgeny Onegin, and at a private performance of the latter (sung and played from the piano score) which took place in the house of Yuliya Abaza in Saint Petersburg on 6/18 March 1879 (eleven days before the opera's stage premiere in Moscow), Lavrovskaya sang the part of Olga. Tatyana was sung by Aleksandra Panayeva (who was the initiator of this performance), Onegin by Ippolit Pryanishnikov, and the Nurse by the hostess. The piano accompaniment was provided by Grand Duke Konstantin Konstantinovich [2].