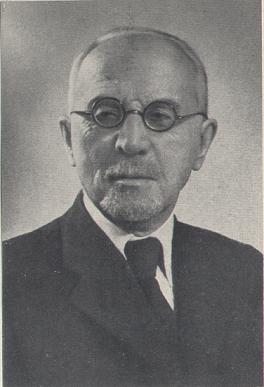 His father was a retired soldier who worked as the steward of various landowners' estates and his mother came from a wealthy Old Believer family, but she died when Vasily was just five and he grew up with his maternal aunt, who encouraged his musical interests. In 1890, Vasily was sent to the Cadet Corps in Saint Petersburg, but he was still able to pursue his hobby by attending the concerts organized by Mitrofan Belyayev in the imperial capital. One of his most enduring impressions from this period was Tchaikovsky's Symphony No. 6, which he first heard at the age of fifteen in a performance conducted by Eduard Nápravník. However, thanks to the Belyayev concerts he also became acquainted with the works of Borodin and Rimsky-Korsakov, which made an equally strong impression on him. He also liked the piano music of Schumann very much. On vacations in Moscow Vasily had the chance to attend productions by Savva Mamontov's private opera company, two highlights being Rimsky-Korsakov's Maid of Pskov in 1897, with Fyodor Chaliapin as Ivan the Terrible, and Sadko in 1898, during which performance he saw the venerable figure of Vladimir Stasov in the audience and the composer himself coming out onstage afterwards. His favourite opera, though, was Yevgeny Onegin, which he first heard at the Bolshoi Theatre in Moscow in 1895, in a production conducted by Ippolit Altani. Later he would also be greatly impressed by Rachmaninoff's approach to conducting Onegin, again at the Bolshoi Theatre.

Although Yakovlev would probably have preferred to study at the conservatory or go to university, it was decided by his family in 1897 that he should continue his military training because this would be paid for by the state, and so he enrolled in the Military Engineers' Academy. After qualifying as a sapper in 1899, he was stationed in Manchuria, but returned to Moscow in 1902, where he was drafted into the 19th Sappers' Battalion. One of Yakovlev's comrades in this unit was the future composer Nikolay Myaskovsky (1881–1950), who became a close friend. They would study music scores together and play them through on the piano. In 1904, they both moved to Saint Petersburg: Myaskovsky, who had left the army, enrolled in the Conservatory, whilst Yakovlev pursued advanced studies at the Military Juridical Academy, though still frequenting artistic circles. Myaskovsky encouraged his friend to take piano and music theory lessons in his spare time, but this Yakovlev did only sporadically and his later contributions to Russian musicology would be devoted to non-theoretical matters, since he modestly claimed not to have a proper grounding in music.

In 1904, Yakovlev started publishing brief articles on literature and music in the journal Russian Antiquity (Русская старина), including an essay in 1910 on Rachmaninoff, whose Piano Concerto No. 2 and the symphonic poem Isle of the Dead had impressed him greatly. He also made the acquaintance of the musicologist and composer Boris Asafyev. In 1908, Yakovlev married Vera Myaskovskaya, the sister of his former army comrade, and she later recalled how on their honeymoon he had taken her to Moscow, where they attended a performance of The Sleeping Beauty and saw Rachmaninoff in the audience, engrossed in the score of Tchaikovsky's ballet. She also noted how during this trip her husband had "very much wanted to visit Tchaikovsky's house in Klin. Vasily Vasilyevich had a special rapport to this composer; Tchaikovsky's music had thrilled him ever since the age of fifteen. He knew all of Onegin by heart, as well as many of his songs. However, he did not then foresee that the study of the music and life of this composer would underlie all his future musicological work." Yakovlev did not in fact manage to visit the Tchaikovsky House Museum in Klin on that occasion.

After graduating from the Military Juridical Academy, Yakovlev served for a few years in Sevastopol (1911–13), but then he decided to leave the army and moved to Saint Petersburg, where he started working in the Senate's archive. In 1914, when Russia entered World War I, Yakovlev was called up again and posted to the Navy General Staff. After the October Revolution of 1917 he served in the Red Fleet staff headquarters until the conclusion of the Russian Civil War.

In 1920, a volume on Tchaikovsky co-edited by Asafyev and Yakovlev was published in Petrograd as part of a new series: Прошлое русской музыки. Материалы и исследования, том 1 (The Past of Russian Music: Documents and Investigations). This included Yakovlev's first article on Tchaikovsky, «Поездка в Клин (февраль 1919 г.)» ("A visit to Klin"), dated February 1919. Leaving the Soviet navy in the early 1920s, he worked in the editorial offices of various journals, as well as in a number of museums and archives, which allowed him to continue his research into Tchaikovsky and Russian musical life in the latter half of the nineteenth century. Yakovlev was particularly interested in the music critics Nikolay Kashkin and Herman Laroche, and he wrote an essay on the latter entitled «Ларош о Чайковском» ('Laroche on Tchaikovsky') for the 1924 edition of Laroche's reviews of Tchaikovsky's works. Another of Yakovlev's principal research interests was the interrelation between music and literature, and in 1940 he published one of his most notable essays: «Чайковский и Пушкин» (Tchaikovsky and Pushkin). That same year also saw the publication of Чайковский на московской сцене. Первые постановки в годы его жизни (Tchaikovsky on the Moscow Stage), a book containing the composer's correspondence with various figures from the world of the Moscow operatic and dramatic theatres, as well as an essay by Yakovlev «Чайковский в московских театрах» (Tchaikovsky in the Moscow Theatres), which drew on his detailed study of the performance history and press reviews of Tchaikovsky's operas. It was in 1940, too, that one of the most important reference works on Tchaikovsky appeared Дни и годы П. И. Чайковского. Летопись жизни и творчества (The Days and Years of P. I. Tchaikovsky). Still used today, this meticulously assembled chronology of the composer's life was produced under the overall editorship of Yakovlev.

During World War II he was a member of staff of the Tchaikovsky House Museum, which had been evacuated to Votkinsk in the Urals, and there he gave a series of lectures for children on Russian fairy-tales and music. After the war he worked briefly in the Glinka State Museum of Musical Culture in Moscow, followed by a longer spell at the Moscow Conservatory (1944–50).

Although Tchaikovsky was very much at the centre of his work, Yakovlev also wrote on the performance history of operas by Rimsky-Korsakov, Borodin, Taneyev, and Rachmaninoff, as well as a book on the baritone Pavel Khoklov, whom he had heard in the title role in Yevgeny Onegin at the Bolshoi Theatre back in the 1890s. Having published a monograph on Kashkin in 1950, Yakovlev would go on to provide an illuminating appraisal of Tchaikovsky's own activities as a music critic in the form of a preface to the second volume of the composer's collected literary works, «Чайковский-критик]]» ('Tchaikovsky the Critic'), which appeared in 1953.

The clarity of his style and his wide range of interests makes Yakovlev's writings on Russian music history accessible to the non-specialist reader as well. During the 1930s and 40s he did not allow himself to be swayed by the ideological currents then prevailing in Soviet academia, not least in musicology, and remained faithful to the principle of close and objective study of the primary sources. A modest man, he once jestingly described himself as a "musical archivist," although in 1944 he was awarded a doctorate honoris causa. Caring little for his own comfort, he lived with his family in a single room in a communal flat in Moscow.