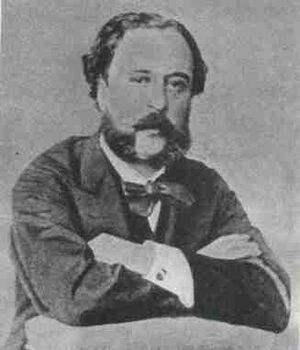 Vladimir Begichev was the scion of an ancient gentry family and studied at Moscow University, after which he worked in various government posts before being finally appointed director of the Imperial Theatres in Moscow. He was a highly cultivated and charming man whose house was a centre of artistic life in Moscow during the 1860s and 70s, its doors always being open to actors and enthusiasts of the theatre. Begichev's house also attracted such eminent guests as Ivan Turgenev, Aleksandr Dargomyzhsky, Aleksandr Serov, Nikolay Rubinstein, and Aleksandr Ostrovsky, as well as Tchaikovsky, who was a close friend of the Begichev-Shilovsky family. In his capacity as director of the Imperial Theatres, Begichev undertook several valuable reforms, as a result of which audience numbers at the Maly Theatre rose significantly, and the troupe's finest actors Ivan Samarin and Sergey Shumsky (1821–1878) were given new opportunities to display their talents. Begichev was the author of many comedies, some of them quite successful, and also regularly appeared on the stage himself.

Begichev was married twice, the second time to Mariya Shilovskaya (1830–1879), herself also recently widowed and with two sons from her first marriage: Konstantin and Vladimir Shilovsky. Begichev thus became their stepfather; he also had a daughter Mariya from his first marriage.

On 26 May/7 June 1868, Begichev, Vladimir Shilovsky, and the singer and actor Konstantin De Lazari (1838–1903) set off from Saint Petersburg together with Tchaikovsky to travel first to Berlin, and then to Paris, where they stayed for some six weeks. Tchaikovsky was invited on this trip to Western Europe (he had only been outside the Russian Empire once before — in 1861) because he was the music teacher of Begichev's stepson Vladimir Shilovsky.

According to the memoirs of Nikolay Kashkin, it was thanks to the initiative of Begichev that in 1873 Aleksandr Ostrovsky was commissioned to write a fairy-tale play with incidental music by Tchaikovsky: The Snow Maiden. Kashkin also recalls how Tchaikovsky had for a long time been thinking of writing a ballet, since this was a musical genre which appealed to him greatly. Such an opportunity finally presented itself when in early 1875 (?) Begichev, who was seeking to expand the repertoire at the Bolshoi Theatre in Moscow, commissioned a ballet from him. Tchaikovsky gladly took up the offer, specifying that he wanted to write a fantastic ballet set in medieval times. Kashkin adds: "If I am not mistaken it was Begichev himself who wrote the scenario for the ballet Swan Lake; the composer approved this subject and agreed to write the music for 800 rubles" [1]. However, the accuracy of Kashkin's account in this respect has been called into question, and two other possible authors of the libretto of Swan Lake (or Lake of the Swans as it was originally entitled) have been suggested: the dancer and balletmaster Vasily Geltser (1840–1905) and the Czech choreographer Julius Reisinger (1828–1892), who was balletmaster of the Bolshoi Theatre from 1873–78 and ultimately responsible for the choreography of the first production of Swan Lake (1877). Since Tchaikovsky completed the full score of the ballet at Glebovo, the family estate of Konstantin Shilovsky, it has also been suggested that the latter may have had a hand in the libretto [2].

When Tchaikovsky, in October 1880, at the request of his brother Anatoly, agreed to make some important changes to the stage directions for the final scene of Yevgeny Onegin, which was soon to be produced at the Bolshoi Theatre in Moscow, one of the persons he wanted to look through these alterations was Begichev [3]. At around the same time Tchaikovsky also promised his brother Modest that he would show Begichev the comedy which he had just completed, with a view to getting it staged [4]. This comedy, entitled The Benefactor (Благодетель), was in fact Modest Tchaikovsky's first literary work, and Begichev seems to have liked it, since The Benefactor was eventually premiered in Moscow in 1881.