Cambridge is a university town and the administrative centre of the county of Cambridgeshire, England.

Tchaikovsky was awarded an honorary doctorate by Cambridge University in 1893 (at the instigation of Charles Villiers Stanford), and arrived there on 31 May/12 June. 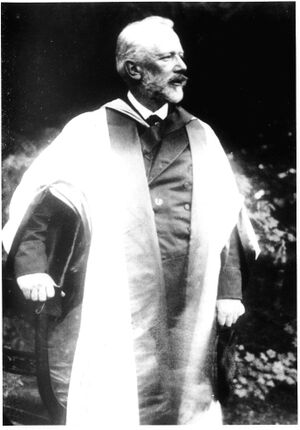 Tchaikovsky in his doctoral robes
(photographed by Florence Maitland)

He stayed with the eminent legal historian and professor of law Frederic Maitland, who had invited him to be his guest at the West Lodge of Downing College. Ill-at-ease at first, he soon found the professor and his wife, Florence, to be "charming and delightful people—and Russophiles to boot". Florence and her sister Adeline both played for Tchaikovsky. The festivities lasted two days.

On the afternoon of his arrival Tchaikovsky directed the first performance in England of Francesca da Rimini at a concert in Cambridge's Guildhall and then attended a "gala dinner and still more gala reception" [1].

The next day, the ceremony awarding him the honorary doctorate took place. Before he left the Maitlands' house, Florence and Adeline pinned a rose in Tchaikovsky's buttonhole and took his photograph (see right).

The ceremony included an official luncheon and reception given by the wife of the university vice-chancellor. Doctor of Music degrees honoris causa were conferred not only on Tchaikovsky and Saint-Saëns, but on composers from three other countries: Max Bruch of Germany, Arrigo Boïto of Italy, and Edvard Grieg of Norway (although Grieg, for reasons of ill health, was not present at the ceremony).

Tchaikovsky returned to London later that same day (1/13 June 1893). "Cambridge, with its colleges resembling monasteries, its peculiarities of manners and customs (many of which date from medieval times), its buildings reminiscent of times long past, made a very favourable impression. It is pleasant to think of this now, but at the time it was very arduous and exhausting" [2].