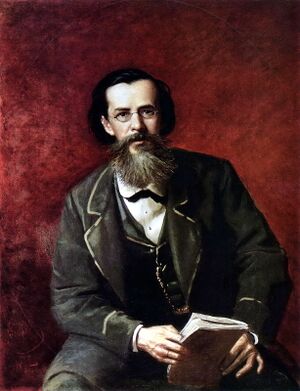 Tchaikovsky's Settings of Works by Maykov

Maykov also provided the text for Tchaikovsky's cantata Moscow, written for the coronation celebrations of Tsar Alexander III in 1883. Seven years later, in a letter to the Grand Duke Konstantin Konstantinovich, Tchaikovsky recalled:

Regarding Maykov, I remember how it fell to me to write a Coronation Cantata on his text. At the time I was staying in Paris... Suddenly I received a proposal, already declined by A. G. Rubinstein, to write a Coronation Cantata in two weeks... I considered that to carry out such a proposition was impossible within such an outrageously short time scale, and gave vent to my feelings to my brother Modest, who at that time happened to have to hand a book of Maykov's verses; my admiration for these was such that they involuntarily stirred my inspiration, and so that I would not forget, I wrote on the book in pencil the musical ideas that had come into my head. Had this not happened then there probably have been no Coronation Cantata, but under the spell of this magic the cantata was ready and dispatched in time, and I consider it to be among the best of my compositions [2].