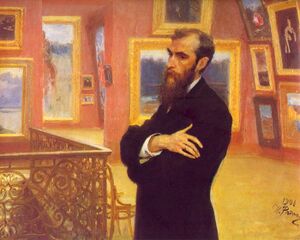 At the age of eighteen Tretyakov inherited his father's textile business, and together with other businessmen he helped to found the Moscow merchant bank, amassing a considerable fortune. He began purchasing artworks in 1854 with the intent of making them accessible to the general public, and soon amassed a considerable collection that outgrew his home (which had to be extended on numerous occasions). In 1893 the Tretiakov Gallery was officially opened in a new building in Moscow.

In his capacity of director of the Moscow branch of the Russian Musical Society, he arranged numerous charity concerts, in which Tchaikovsky sometimes participated. There were also family connections — Tretyakov's sister Yelizaveta (1835–1870) was the mother-in-law of the composer's brother Anatoly, and Tretyakov's daughter Vera (1866–1940) was the wife of Tchaikovsky's friend Aleksandr Ziloti.

8 letters from Tchaikovsky to Pavel Tretyakov have survived, dating from 1882 to 1890, all of which have been translated into English on this website:

2 letters from Pavel Tretyakov to Tchaikovsky, dating from 1881 and 1890, are preserved in the Klin House-Museum Archive.