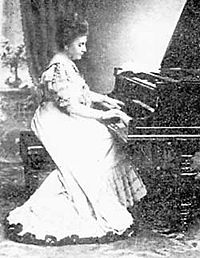 She was born into a wealthy family in Ufa, Bashkortostan, and showed an early musical aptitude. From the age of six she began taking piano instruction from local teachers, and gave her first public performance, featuring a Mozart concerto, three years later. On the recommendation of Anton Rubinstein, Timanova was admitted to Carl Tausig's piano school in Berlin, and she went on to study under Franz Liszt.

A frequent performer in Russia and western Europe, she eventually settled in Saint Petersburg in 1907, where she gave concerts and piano tuition. Her last public performance was in 1937, when she was 82 years of age. She died during the siege of Leningrad in 1942.

One letter from Tchaikovsky to Vera Timanova has survived, dating from 1887, and has been translated into English on this website:

2 undated letters from Vera Timanova to the composer are preserved in the Klin House-Museum archive.