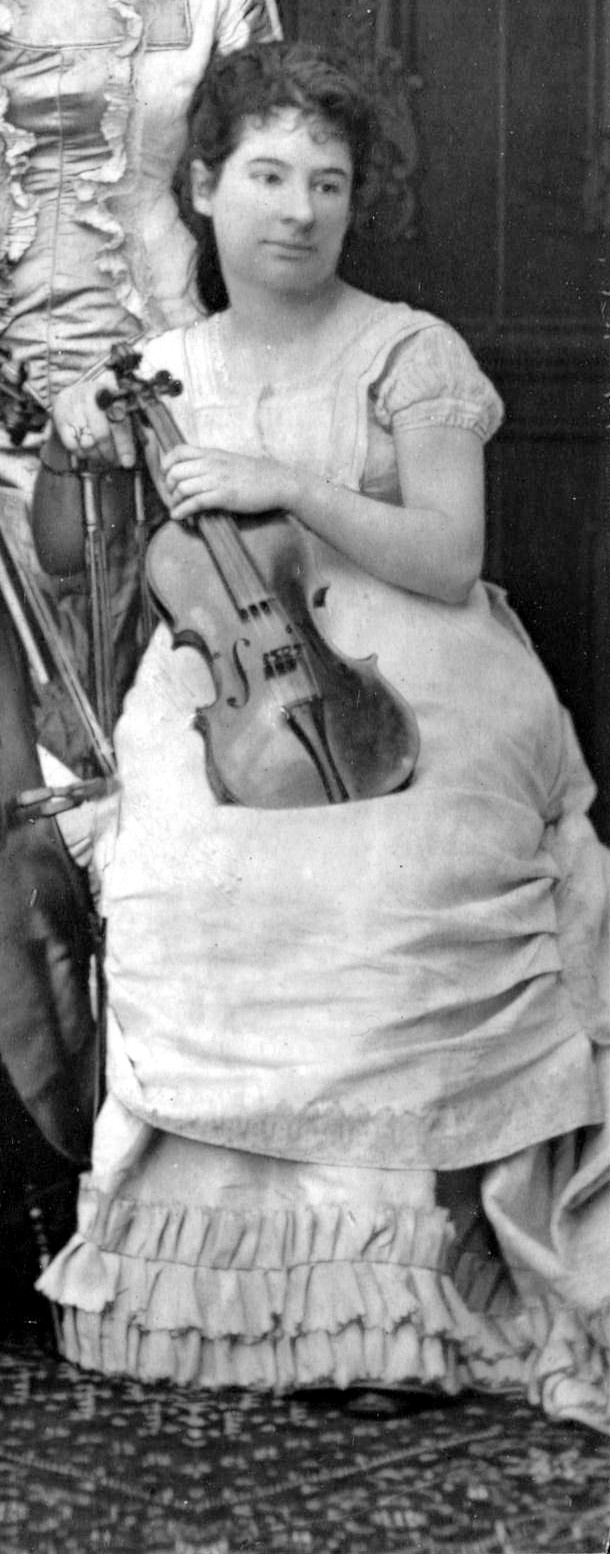 Marie was born in Pau, in the south of France, but spent most of her childhood in La Rochelle, where her mother Adélina-Eulalie-Aude (née Mettez) worked as a music teacher, and in Paris. Her father, Henri Tayau, was engaged at Offenbach's Théâtre des Bouffes-Parisiens both as a tenor (he created a number of roles in Offenbach's operettas, including the title role in Orphée aux enfers [1858]) and as a violinist in the orchestra [1]. It was probably Marie's father who was her first teacher and she showed exceptional talent very early on. At the age of ten she gave her first public performance in La Rochelle and two years later, in 1867, she completed her studies at the Paris Conservatoire winning first prize at the annual examination. Her teacher at the Conservatoire had been Jean-Delphin Alard (1815–1888), who also numbered the great Spanish violinist Pablo de Sarasate (1844–1908) among his pupils [2].

In April 1869, aged just 13, Tayau gave a solo concert in Paris and went on to give performances in Bad Ems, La Rochelle and London (in the summer of 1870). However, from the autumn of 1870 to the end of 1874 her public appearances were far between and limited to France, which suggests that she may have been pursuing further studies in order to perfect her technique [3]. It was not until 1875 that her career as a concert violinist really took off. She appeared as a soloist in several concert series in Paris, including the "Concerts populaires" directed by Jules Pasdeloup (1819–1887), and played in such prestigious venues as the Salle Érard, the Théâtre du Châtelet, the Cirque d'Hiver and the Cirque des Champs-Elysées. She also toured a number of European cities, giving concerts in Brussels and Liège in 1879; The Hague, Aachen, Antwerp and Verviers in 1880; and Brussels again in 1883. Her repertoire included solo pieces, concertos and chamber works by such composers as Haydn, Mozart, Beethoven, Hummel, Weber, Mendelssohn, Schumann, Anton Rubinstein and, as will be discussed further below, Tchaikovsky. Already by 1879 a reviewer in the Allgemeine musikalische Zeitung described her as the most brillian woman violinist of her generation, second only to Wilma Neruda (1838–1911) [4].

Marie Tayau was particularly enterprising in the field of chamber music. Towards the end of 1875 she founded a women's string quartet — the "Quatuor Saint-Cécile" — which gave several recitals over the years, not just of string quartets but also of piano trios, quartets and quintets since a number of women pianists welcomed the opportunity to play with Tayau's ensemble. She championed the works of female composers, including Louise Héritte-Viardot (1841–1918), the eldest daughter of Pauline Viardot: thus, in 1877, she joined the cellist Charles Lebouc (1822–1893) and Madame Viardot at the piano in a performance of a trio by Louise, and at the concerts of the "Sociéte de l'Art moderne", another chamber music ensemble which she set up the following year, Tayau featured other works by her [5]. However, she also took up the cause of a number of contemporary male composers. Benjamin Godard (1849–1895) wrote for her his Concerto romantique, Op. 35, which she premiered on 10 December 1876 at one of Pasdeloup's "Concerts populaires" (which also featured the first performance in France of Tchaikovsky's overture-fantasia Romeo and Juliet) [6]. Accompanied by the composer at the piano, Tayau also gave the first performance of Gabriel Fauré's Violin Sonata No. 1 in A major, Op. 13, at the Salle Pleyel on 27 January 1877 [7].

Together with her second ensemble, the "Quatuor moderne", Marie Tayau gave the first performance in France of Tchaikovsky's String Quartet No. 3 on 15 January 1880. The reviews of this complicated work that appeared in the Parisian press are, as Lucinde Braun has observed, very instructive for the early reception of Tchaikovsky's music in France [8]. At this concert Tayau also played the Sérénade mélancolique (in the version for violin and piano), a piece which, in contrast to the quartet, had already been heard in France (the first performance having been given by Stanisław Barcewicz (1858–1929) at one of the "Russian Concerts" conducted by Nikolay Rubinstein during the Paris World Fair in the summer of 1878) and was received more positively.

Given that Tayau was showing such an interest in Tchaikovsky's music (as early as 1880 a review of her concert in Aachen had pointed out that she was studying the Violin Concerto [9]), it is not surprising that when the composer's French publisher, Félix Mackar, began, in the autumn of 1885, to make plans for a recital ("audition") that would feature exclusively Tchaikovsky's works, he sought to engage Tayau as one of the soloists. She willingly accepted, and at this recital, which took place in the Salle Érard on 14 January 1886 [N.S.], she played the Valse-scherzo (in the version for violin and piano), as well as the three pieces for violin and piano that make up Souvenir d'un lieu cher [10]. Mackar wrote to Tchaikovsky a few days later: "[i]n Marie Tayau I have found a keenness to perform your music to which I must draw your attention in particular; wherever she performs in future, she will make a point of playing something by Tchaikovsky" [11]. In his reply, Tchaikovsky duly asked Mackar to convey his "most ardent compliments to Mlle Marie Tayau" [12].

During his month-long stay in Paris in the summer of 1886, Tchaikovsky went to pay his respects to Marie Tayau on 7/19 June, but she was not in and he could only leave his visiting card. However, when he returned to his hotel that evening he found a bouquet of flowers which Tayau had sent him. He returned the compliment by sending her a bouquet of his own the following day and was finally able to meet her at her house (No. 7, Rue de Navarin) on 9/21 June, as we learn from the composer's diary: "Rode to fit some clothes; to Mackar, to Brandukov; to Marie Tayau. Visited her for an hour and a half. Charming character" [13]. As Lucinde Braun has pointed out, it is clear that during this long visit Tchaikovsky and Tayau discussed specific plans for her giving the first performance of the Violin Concerto in France under his direction at a concert in the coming 1886/87 season [14]. Accordingly, in the letter which on 12/24 June 1886 she wrote to Tchaikovsky, who had by then left for Russia, she asked him if he would not change his mind, adding that it would make her very unhappy if he were to do so. She explained that she had been looking through the Violin Concerto again, which had sent her into ever increasing raptures, and that she could not wait to perform it together with Tchaikovsky that winter [15]. Tchaikovsky, in his reply, assured her that he could not possibly go back on his word, especially considering how much he was indebted to her: "Was it not you after all who was the first to try to propagate my music in Paris?" [16].

However, these hopes ultimately did not come true. In a letter to Tchaikovsky on 23 November 1886 [N.S.], whilst mentioning in passing that Marie Tayau was regularly performing his works at her Wednesday soirées, Mackar wrote that for the second all-Tchaikovsky recital that he was hoping to organize in Paris that winter he was intending to engage the Belgian violinist Martin Pierre Marsick (1847–1924), as well as the pianist Louis Diémer. Marsick had also been showing great interest in Tchaikovsky's works (albeit somewhat later than Tayau), and he was duly one of the soloists at this second "audition", which took place in the Salle Érard on 24 February 1887 [N.S.]. Marsick was also keen to give the first performance in Paris of the Violin Concerto during the following (1887/88) season, and Tchaikovsky, in a letter to Mackar of 6/18 December 1887, explained that the Belgian violinist was a more suitable soloist for this work than Tayau. Because he understood that it would deeply hurt her if she found out that he had gone back on his word after all, Tchaikovsky asked his publisher to find a way of presenting the whole affair so that it would seem as if he, Mackar, had taken the decision of engaging Marsick for the scheduled concert at the Théâtre du Châtelet in March 1888 [17]. In the end, Tchaikovsky was 'punished' for his duplicity in this matter because, at the insistence of the orchestra's resident conductor, Édouard Colonne, who was against including the Violin Concerto in the programme, only the first movement of the work was performed (with Marsick as the soloist) at the Châtelet concert conducted by Tchaikovsky on 11 March 1888 [N.S.] [18]. Tayau, however, did not bear Tchaikovsky any grudge for this betrayal of her hopes and she continued to write to him letters full of admiration and enthusiasm for his music.

From around 1886 Marie Tayau had in fact stopped giving regular concerts so as to be able to concentrate on her teaching at the "École Normale de Musique" in Paris. She was apparently much sought after as a violin teacher. She died in late August 1892, aged just 37. The obituary which appeared in Le Ménestrel concluded with the following words: "Mlle Marie Tayau will be sorely missed, for this worthy artiste had a splendid heart" [19].

One letter from Tchaikovsky to Marie Tayau has survived, dating from 1886, and has been translated into English on this website:

3 letters from Marie Tayau to Tchaikovsky, dating from 1886 to 1889, have survived in the archive of the Tchaikovsky House-Museum at Klin [20].