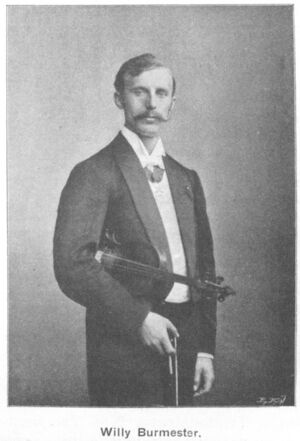 The son of a violinist in the Hamburg Philharmonic Orchestra, Willy by the age of seven had won the reputation of a child prodigy in his native city, and three years later he played Mendelssohn's Violin Concerto at the Conventgarten. He studied under Joseph Joachim from 1882 to 1885 at the Hochschule in Berlin, where he was thoroughly grounded in the classical tradition, although he would later depart from the ideals of the Joachim school in concentrating on music of the bravura type. After returning to Hamburg Willy received some encouragement in his career from Hans von Bülow.

On 8/20 January 1888, the day that Tchaikovsky was due to conduct a Philharmonic Society concert in Hamburg featuring his own works, he was visited in the morning by Willy, his sister Johanna (a pianist), and their father. Willy played him his Violin Concerto, and Tchaikovsky promised that he would write letters of recommendation to Édouard Colonne and Hans von Bülow on behalf of the "talented young violinist" (as he called him in the Autobiographical Account of a Tour Abroad in the Year 1888).

On 28 March 1888 [N.S.] Burmester wrote the first of his 11 letters to Tchaikovsky (they corresponded in German), asking if he could help him to be engaged as concertmaster and soloist at the summer concerts in Pavlovsk, near Saint Petersburg, which the German conductor Julius Laube was going to conduct. (Laube]] and his orchestra had been invited to Pavlovsk on Tchaikovsky's recommendation). Burmester obtained such an engagement and went to Pavlovsk that summer, where Tchaikovsky heard him play at a concert on 8/20 July 1888. At the end of the summer Burmester was considering staying in Russia for the winter season and wrote to Tchaikovsky asking for permission to perform his Violin Concerto, as well as for recommendations to the Russian Musical Society in Moscow. However, Tchaikovsky, who was on the society's board of directors, explained that all the concerts in Moscow had already been scheduled, and Burmester returned to Germany.

The following year, at the Philharmonic Society concert in Hamburg on 3/15 March 1889, in the first half of which Tchaikovsky conducted the first performance in Germany of his Symphony No. 5, Burmester appeared as a soloist in the second half, playing Ernst's Violin Concerto in F♯ minor and two solo violin pieces by Spohr and Wieniawski, with Julius von Bernuth conducting. An entry in Tchaikovsky's diary during that stay in Hamburg suggests that the young violinist's requests for support in advancing his career were beginning to get on his nerves: "Burmester is becoming more and more repulsive to me" [1]. Nevertheless, Burmester would again receive an invitation to play at Pavlovsk that summer.

After having had some lessons with Bülow in the autumn of 1889 (they studied Bach and sonatas by Beethoven and Brahms), Burmester accepted an appointment as orchestral leader at Sondershausen. In the summer of 1892 he was engaged as concertmaster and soloist with the "Aquarium Orchestra" in the Zoological Garden of Saint Petersburg. He wrote again to Tchaikovsky, asking if they could take part in a joint concert, but the composer was too busy to consider such an idea. At the end of that summer Burmester removed to Helsingfors (Helsinki) where he obtained an appointment as concertmaster and soloist with the newly established Philharmonic Orchestra under Robert Kajanus. Burmester's last letter to Tchaikovsky, sent from Helsingfors on 2 February 1893 [N.S.], contained an invitation (seconded by Kajanus) to the composer to come to Helsingfors, "a small but music-loving city which is full of enthusiasm for your masterpieces", and conduct some concerts there as he had done in so many other European cities. Tchaikovsky was unable to travel to Finland that spring, and so Burmester's hopes of playing the Violin Concerto with the composer himself conducting were never fulfilled.

A Paganini recital which Burmester gave in Berlin in 1894 led to the international breakthrough he had so yearned for. His solo recitals in Europe and America would attract much attention for their technical feats, although his subsequent career did not fulfil the promise of his earlier years. He finally settled in Berlin, where he taught with success. He was also known for his editions of small pieces for the violin by the older masters. In his autobiography Peter Tschaikowsky und Hans von Bülow (1926) there is a whole chapter dedicated to Tchaikovsky and Hans von Bülow.

4 letters from Tchaikovsky to Willy Burmester have survived, dating from 1888 to 1889, all of which have been translated into English on this website:

11 letters from Burmester to Tchaikovsky have survived, dating from 1888 to 1893, of which 10 are preserved in the Klin House-Museum Archive, and one is in the Russian State Archive of Literature and Art in Moscow.