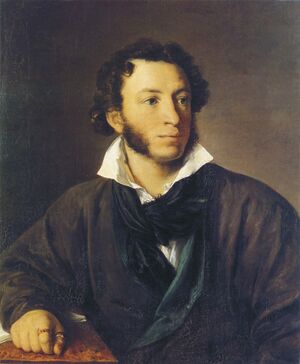 Tchaikovsky's Settings of Works by Pushkin

Pushkin's works formed the basis for three out of Tchaikovsky's eleven operas:

Two of Tchaikovsky's songs are also set to Pushkin's poems:

Why Did the Merry Voice Grow Silent? (Что смолкнул веселия глас?), the second of Tchaikovsky's Three Choruses (1891), is based on Pushkin's poem Bacchic Song (Бакхическая песня) (1825).

At some point during his student years (1863-65), Tchaikovsky wrote music to accompany the Fountain Scene in Pushkin's tragedy Boris Godunov (Борис Годунов) (1825), although this composition is now lost.

Tchaikovsky's symphonic ballad The Voyevoda, Op. 78 (1890-91) was inspired by Pushkin's translation of the poem Czaty: Ballada ukraińska (The Ambush: A Ukrainian Ballad) by Adam Mickiewicz (1798-1855).

In December 1884 and January 1885 Tchaikovsky corresponded with Vasily Kandaurov about a projected opera called The Gypsies (Цыгане), after Pushkin's 1824 poem of the same name. Although Kandaurov had already begun work on the libretto, Tchaikovsky quickly decided not to pursue the project.

Between 1885 and 1888 Tchaikovsky considered writing an opera on the subject of Pushkin's 1836 novel The Captain's Daughter (Капитанская дочка), to a libretto by Ippolit Shpazhinsky, before rejecting the idea.