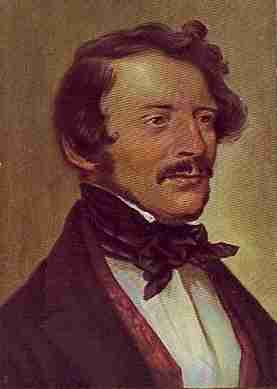 Herman Laroche, recalling Tchaikovsky's enthusiasm for Italian opera in his youth, observed that of all the Italian masters, the one whom his late friend had always found the least interesting was Donizetti [1]. This is indirectly borne out by the fact that Tchaikovsky said very little about Donizetti's operas in his music review articles and letters — less than was the case with Bellini and certainly much less than his frequent comments on Rossini and Verdi. Still, it is worth bearing in mind that Tchaikovsky first heard Donizetti at a very early age: thanks to the orchestrina which father had brought with him from Saint Petersburg to Votkinsk on one occasion. This orchestrina, with its sophisticated system of mechanical stops, introduced little Petia not only to Mozart (Zerlina's aria from Don Giovanni), but "also acquainted him with the music of Rossini, Bellini, and Donizetti, and his love of Italian music, which never left him all his life (even when this music was subjected to the most frenzied persecution in serious musical circles in the 1860s and 70s), probably came to him from there" [2].

The composer's brother Modest would later also recall how during his years at the Imperial School of Jurisprudence (1850–59) and, after graduating, at the Ministry of Justice (1859–63) Tchaikovsky's "sole true musical delight" was the Italian Opera in Saint Petersburg, since he hardly had any opportunities to hear symphonic or chamber music, and his weekly piano lessons with Rudolf Kündinger from 1855–58 were not really sufficient to make up for this. The Italian Opera Company, however, which could boast such stars as Angelina Bosio and Enrico Tamberlik among its guest artists, "showed him Meyerbeer, Rossini, Donizetti, Bellini, and Verdi, all of whom awakened his wholehearted enthusiasm" [3]. The young Tchaikovsky's passion for Italian opera was encouraged by the Neapolitan singing-master Luigi Piccioli, who had settled in Saint Petersburg in the 1840s, and whose musical credo, according to Modest, "boiled down to a complete rejection of all music other than the music of Rossini, Bellini, Donizetti, and Verdi [...] since apart from the works of the great melodists of Italy, everything else was unworthy of the name of music and did not even deserve to be taken notice of" [4]. In his brief Autobiography of 1889 Tchaikovsky himself would speak of the "tremendous influence" which Piccioli acquired over him at the time and how even in later years it had left traces in his musical sympathies. It is significant, however, that although he admitted there that the music of Rossini and especially Bellini still moved him deeply, he did not mention Donizetti's as having the same effect.

This seems to confirm what Laroche would later say about Donizetti being the least interesting of the Italian bel canto composers for Tchaikovsky. Nevertheless, Laroche also cited in connection with this a remark which Tchaikovsky made at the time that, thanks to Nikolay Zaremba's harmony classes, he was beginning to appreciate more 'serious' music: " 'With the Italians,' he told me in 1862 or 1863 (referring, I think, to the sextet from Donizetti's Lucia), 'it is usually the case that there is always one number in the opera which is truly outstanding, whereas the rest is just beneath all criticism'" [5]. Tchaikovsky's admiration for the Lucia sextet is also reflected in the memoirs of Pavel Pchelnikov, who knew the composer in the 1880s: "It seemed strange that Pyotr Ilyich should have been so partial to light Italian music. Very often he would come to the theatre to see Traviata, Il barbiere di Siviglia, and especially Lucia, in which he very much liked the famous sextet; once he had heard it, in fact, he would often leave the opera-house" [6].

From Tchaikovsky's articles of the 1870s we know that he heard Adelina Patti in such masterpieces of Donizetti as L'elisir d'amore, Linda di Chamounix, and Don Pasquale, but apart from observing that Linda was one of the famous soprano's finest roles (see TH 268), he said nothing specific about Donizetti's music. In one of his frequent attacks on the impresario Eugenio Merelli, who had an effective monopoly on the stage of the Bolshoi Theatre for his Italian Opera Company, Tchaikovsky made a dismissive remark about the "wishy-washy operas like Lucia and La traviata" which formed the staple of its repertoire (TH 273). However, such offhand remarks by Tchaikovsky may not necessarily reflect his true feelings about these works — they may simply have been a way of venting his frustration at the neglect of Russian opera which the Imperial Theatres' Directorate was sanctioning in Moscow by its support for Merelli and the Italian impresarios who succeeded him. Tchaikovsky's indignation was also aggravated by the low production standards in which these Italian operas were presented to the public — except for the occasional star singers imported from abroad, performances tended to be ruined by lacklustre soloists, understaffed choruses, an under-rehearsed orchestra, and shabby decorations. It was evidently such a production at the Bolshoi Theatre that Tchaikovsky was reminded of during his second visit to Venice in April 1874, when he ironically compared the "dirty and derelict palaces" to "the decrepit sets and scenery from Act I of Lucrezia Borgia" [7].

Donizetti is also mentioned with negative connotations in Chapter IX of the Autobiographical Account of a Tour Abroad in the Year 1888, in which Tchaikovsky reflects on the decline of Italian music in the second half of the nineteenth century, observing how the younger Italian composers either tried to affect Germanic "seriousness and depth" or simply contented themselves with recycling "the operatic commonplaces of Bellini and Donizetti". (It is worth noting that Tchaikovsky wrote down these pessimistic reflections in 1888, that is four years before he heard Mascagni's Cavalleria rusticana, which would cause him to reconsider his views about the state of music in Italy).

When Tchaikovsky agreed to make some changes to the score of The Queen of Spades in October–November 1890, at the request mainly of the conductor Eduard Nápravník and the tenor Nikolay Figner (who was due to create the role of Herman at the opera's premiere in December), he was informed by his brother Modest (the co-librettist on this work) that what these two wanted were above all changes to the final scene of Herman's suicide: "Everyone wants want melodic décor to accompany his death. What is your view on that?" [8]. Tchaikovsky replied with a mixture of indignation and irony: "Needless to say, I would be extremely loath to agree to any sort of revision. The idea to introduce changes is certainly down to Figner, who probably wants something like the last aria in Lucia with its interruptions, dying gasps, etc. But surely such a thing is impossible?!!" [9]. Fortunately, Tchaikovsky overcame his reluctance to extend Herman's last moments before death, as his dying vision of Liza announced by the love theme dispels the cynicism of his Brindisi and the sinister motif of the Countess — just as the dying Edgardo's "O bell'alma innamorata" dispels his earlier rage at what he had imagined to be Lucia's betrayal of his love. Tchaikovsky's decision to comply with these requests, making the finale of The Queen of Spades closer to that of Lucia di Lammermoor suggests that he didn't always walk out of performances of Donizetti's opera after the sextet, and that he did perhaps appreciate the beauty of the final scene in the Ravenswoods' graveyard, however conventional and 'unrealistic' Edgardo's death throes may have seemed to him.